JFD452: Phase IV, Another Earth, Save the Green Planet 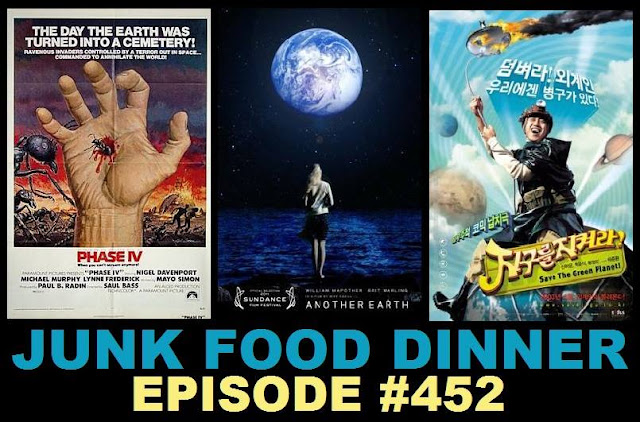 Sci-Fi-Ebruary rolls along in this, and every, dimension with three flicks chosen by our buddies on Patreon.

First, due to some cosmic bullshit, ants get really, really smart and the only thing stopping them from taking over the world is some British dude and some other dude in 1974's "Phase IV," directed by Saul Bass.

Next, Brit Marling stars as would-be future scientist who's life is derailed during a drunk driving accident. To make matters worse, a whole new planet has suddenly emerged in 2011's "Another Earth."

Finally, a mentally ill man kidnaps a businessman he thinks is actually an alien mastermind in the South Korean flick, "Save the Green Planet" from 2003.

All this plus Nerd News, DVDs, a sweet Sweetman song, Karaszewski sightings, Sleepy Moss, other voicemails, a JFD roadtrip, the Insane Kevin Posse and so so so much more!

Also, if you like the show, please take a minute and subscribe and/or comment on us on iTunes, Stitcher, Blubrry or Podfeed.net. Check us out on Facebook and Twitter! We'd love to see some of your love on Patreon - it's super easy and fun to sign up for the extra bonus content. We become unwitting superheroes via your love and support. Please avoid checking out this embarrassing merchandise!