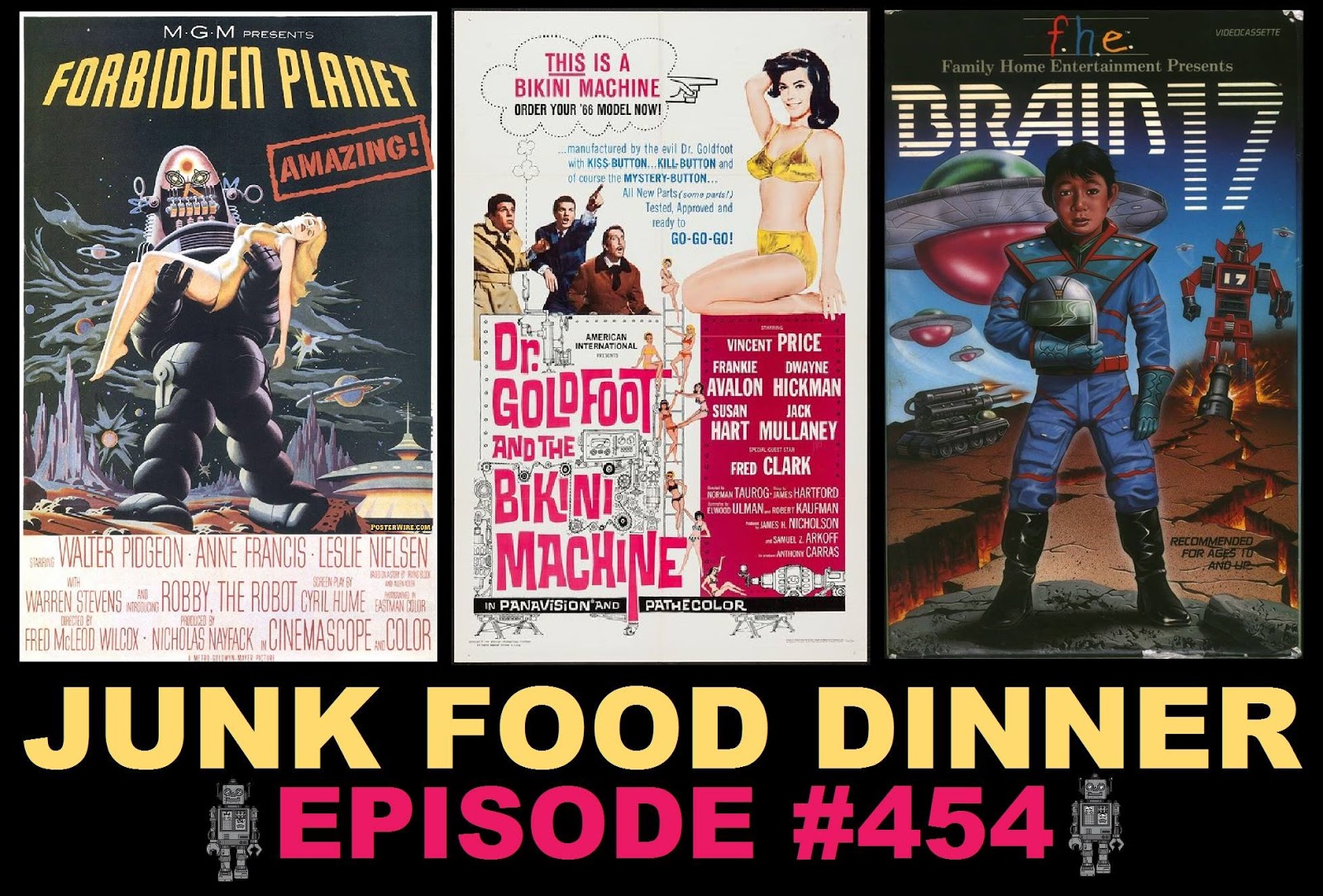 The only logical conclusion to our thrilling month of Science Fiction based podcasting is precisely what will be delivered to you this week, in the form of this: a Robot Theme Show. Let's get metallic!

Next up! It's 1965's Dr. Goldfoot and Bikini Machine, a movie with a title so implausible only AIP could've produced it. And would you believe that your charming hosts argue about whether or not it's a sci-fi film? Feat Vinnie Price, Frank Avalon, babes.

Finally! It's a third movie: Brain 17, which probably you ain't heard of, but maybe you've heard of it's bigger brother Daitetsujin 17. This 1982 feature is a recut of an earlier 1977 Toei-produced TV series, and features a whole horde of cheaply made Japanese giant robots tripping over themselves/cities. Who are the real monsters? It might be the dub voice actors.


All this plus Parker's journalistic prowess reaps rewards, Sean stereotypes the local Japanese population, Parker's computer makes Windows sounds on the recording now and there's nothing on earth that can stop it, a really wild amount of dishwashing ambience, yet another one of those nights where Sean contemplates how he's wasted his life, more good recommendations from The Fallen One, seriously there's a whole ambient noise backstory going on in this episode and the entire plotline of it is centered around pot-scrubbing, an animated series based on your favorite Mogwai-based horror franchise, Feldmanspotting, should Gene Simmons fornicate a replicant in an arena?, Parker makes a home video selection blunder that leads to a classic disrespect situation, Kevin calls a movie a Drive-In Classic, for sure something is getting broken in the background noise there - like a window maybe - who knows?, Sean gets two movies mixed up in his mind, more mouse clicking noises than normal from reasons that remain largely mysterious, the insane outer-space sexual politics (of outer space!), restrictive pornography laws aboard space-cruises for space-men, Parker declares a movie should be 10 to 15 minutes shorter, shoe-horned garage-rock black-face bands, Parker Bowman falls in love with Frankie Avalon, teen wolf has nards, "suddenly: one year later", fake spy beards, our weekly news plus Blu-ray Picks and a whole lot more!

Also, if you like the show, please take a minute and subscribe and/or comment on us on iTunes, Stitcher, Blubrry or Podfeed.net. Check us out on Facebook and Twitter! We'd love to see some of your love on Patreon - it's super easy and fun to sign up for the extra bonus content. We'll see the first 16 Brains for your love and support. Please avoid checking out this embarrassing merchandise!
Labels: Brain 17 Dr. Goldfoot and Bikini Machine Forbidden Planet robots Sci-Fi Ebuary