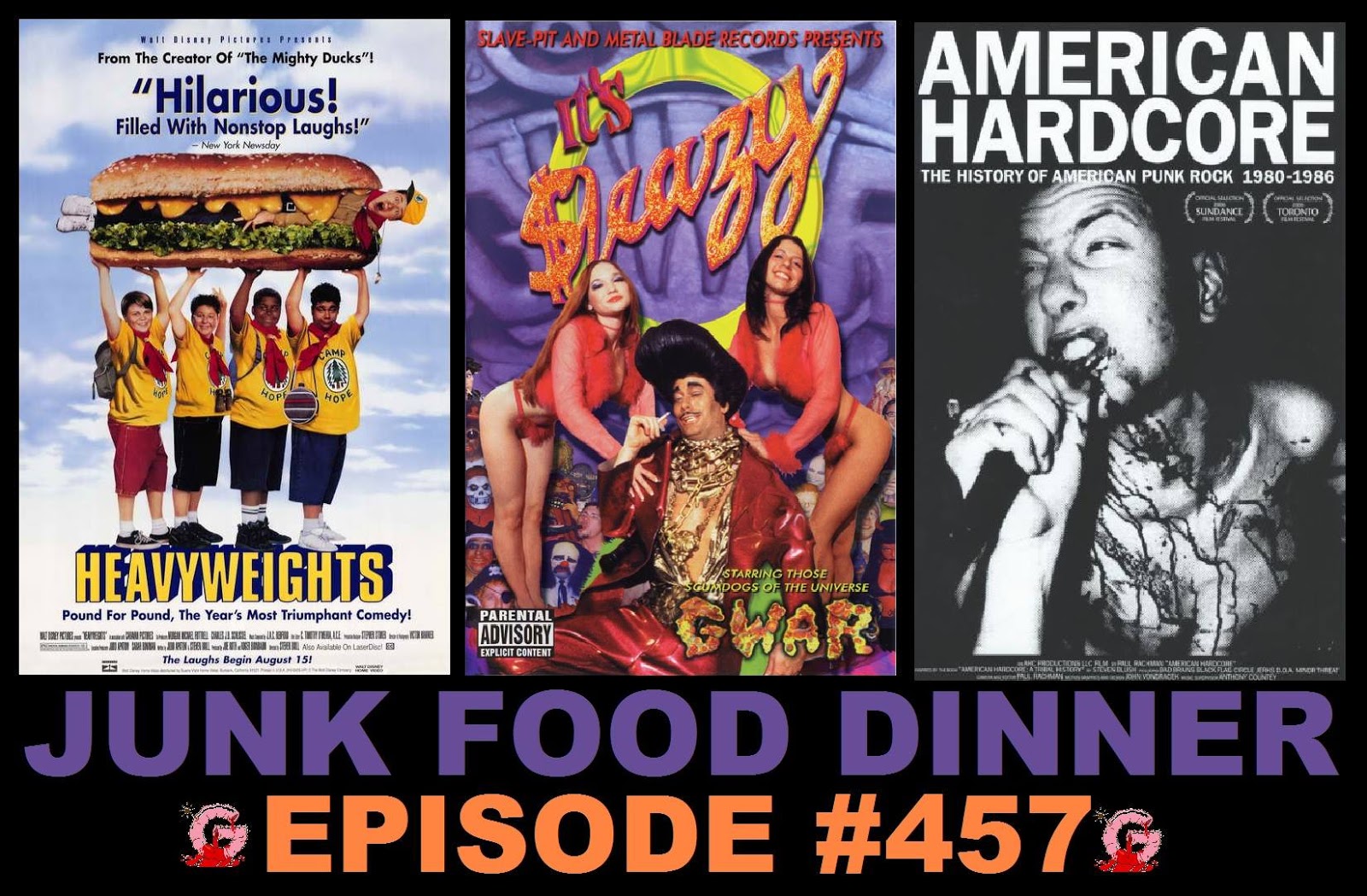 Prepare to be castrated in outer space, scumdogs! Junk Food Dinner is celebrating GWARch this year the only way we know how: with our good friend Travis Olgin of the world-famous GWARCast! It's a sleazy one.


Up first! Way back in the pre-9/11 days of yore, there was a movie called Heavyweights from 1995. A surprisingly high quotient of likable character actors (including Jerry Stiller), soon-to-be-famous comedic actors (like Kenan Thompson), and pre-fame super-scribes (Judd Apatow & Paul Feig), plus Skinny Weiner jokes pop up in this Disney-produced Ben Stiller kids movie about a fat camp. Don't worry about the title, it's just a single entendre.

Next up! It's GWAR's Jerry-Springer-esque talk show parody / simulated snuff film It's Sleazy, from the year 2000. Have you ever wanted to see a man chop off his skinny weiner on stage in front of a crowd of half-rate werewolfmen? We've got the video for you! Also: feat Slymenstra Hymen.

Finally! It's a third movie: American Hardcore: The History of American Punk Rock 1980-1986, which is exactly what the title suggests. Check it out for the Bad Brains, stick around for the unexpected Moby.


All this plus more GWAR chat than you can handle, Feldman in Neverland, the Zombie Dog Celebrity Scene, horror comedy musical review, the time Kevin didn't get to party with Meatloaf or Fairuza Balk, the mystery of a the third film recommendation, the death of shared universes, some wild call-in fiascos, a double dose of sad musical nerd news and a single heaping of non-musical sad nerd news, how to pronounce (and spell!) our guest's name, the inventor of the Brillo pad, somebody from Pete & Pete, somehow nobody makes a Goldberg/Spear joke, four men drool over Ben Stiller's muscles, more fun with casual racism in a Disney film, cigarette violence, krazy kall-ins, a brand-new plea for your hard-earned dollars, bad parenting, embarassing admissions, the fear of god, our weekly news plus Blu-ray Picks and a whole lot more!

Also, if you like the show, please take a minute and subscribe and/or comment on us on iTunes, Stitcher, Blubrry or Podfeed.net. Check us out on Facebook and Twitter! We'd love to see some of your love on Patreon - it's super easy and fun to sign up for the extra bonus content. We'll soak you in bodily fluids for your love and support. Please avoid checking out this embarrassing merchandise!
Labels: American Hardcore Ben Stiller Disney GWAR GWARCast GWARch hardcore Heavyweights It's Sleazy Punk Punk Rock Travis Olgin