JFD462: The Cube, Bar-B-Que Movie, Freddy vs Jason vs Ash 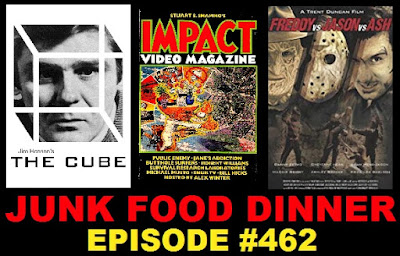 Break out your basketball shorts because this week the JFD crew keeps it brief with three short films!

Up first, in 1969 Jim Henson directed a surreal hour-long episode of  NBC Experiment in Television titled The Cube about a man trapped in a plain white room where various visitors attempt to drive him insane.

Then, in 1988, after the cancelation of the TV show Night Flight, Stuart Shapiro released Impact Video Magazine, a VHS compilation of music performances, stand-up comedy and weird film shorts, including Alex Winter's Bar-B-Que Movie (AKA Entering Texas), a super 8 home movie about a family on vacation who run afoul of The Butthole Surfers.

And finally, we take a look at Trent Duncan's 2013 fan film Freddy vs Jason vs Ash about a couple girls terrorized by three horror movie icons in the woods of Florida.

All this plus witty banter between friends, a slew of Junk Mail, news about James Wan, all the upcoming Stephen King adaptations you can handle, this week's blu-rays and so much more.

Got a movie suggestion for the show, or better yet an opinion on next week's movies? Drop us a line at JFDPodcast@gmail.com. Or leave us a voicemail: 347-746-JUNK (5865). Add it to your telephone now! JOIN THE CONVERSATION!
Also, if you like the show, please take a minute and subscribe and/or comment on us on iTunes, Stitcher, Blubrry or Podfeed.net. Check us out on Facebook and Twitter! We'd love to see some of your love on Patreon - it's super easy and fun to sign up for the extra bonus content. We become unwitting superheroes via your love and support. Please avoid checking out this embarrassing merchandise!
Labels: Alex Winter Bar-B-Que Movie Butthole Surfers Freddy vs Jason vs Ash Jim Henson The Cube Trent Duncan