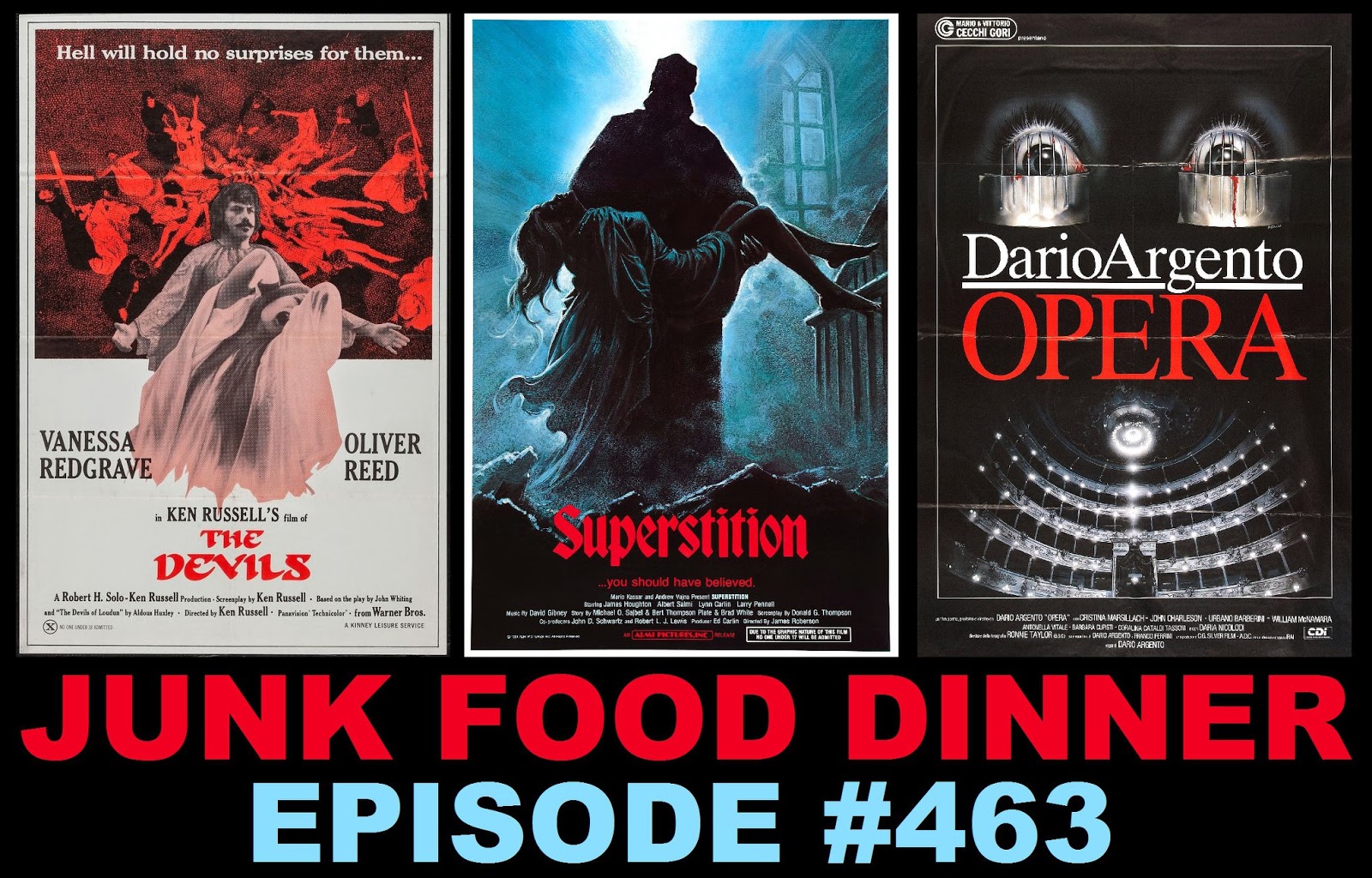 Don't be too slow, Junk Food Junkies!! You gotta go fast with Sonic, Dario, Kevin, Rusty, Parker, Sean, Oliver and the gang! It's a wild and weird PATREON-Picked episode this week!


Up first! Way back in the pre-9/11 days of yore, there was a movie called The Devils from 1971. A surprisingly high quotient of naked nuns (including Vanessa Redgrave) get mixed up in a plot to banish high-priest (Oliver Reed) from the church, and commit loads of sexual blasphemies along the way. Considering what really happens in real-world Christianity [note: 1], this is considered by some [note: 2] to be a refreshingly optimistic take on the church. Thanks to Chris B for picking it! [note 1: child rape; note 2: parker bowman]

Next up! It's the rarely-discussed 1982 (or 80-something, at least) Canadian (or Canadian-American, at least) semi-slasher Superstition, (or The Witch, sometimes). It's a movie we've watched and you'll hear about it. I can tell you this now: it's got some killer kill scenes. The rest is maybe a blur already. Thanks to Andreas for picking it!

Finally! It's a third movie: Opera, the 1987 feature from famed Italian horror master Dario Argento. This is one everyone's been requesting for just about forever, so let us just say we're very sorry. Thanks to Luke/Josh for picking it!


All this plus perhaps too much discussion of the last episode of Game of Thrones, a surprising lack of Sonic trailer reactions, Avengers Endgame stuff, oversized book confessions, trading some times, oh: Blob Zombie?, a summary of British basketball players historical and current, more Avengers Endgame stuff, a Parker Bowman cosplay update, police humor, Sean thought she was suckin' on it, Free Dummy, our weekly news plus Blu-ray Picks and you're still too slow!

Also, if you like the show, please take a minute and subscribe and/or comment on us on iTunes, Stitcher, Blubrry or Podfeed.net. Check us out on Facebook and Twitter! We'd love to see some of your love on Patreon - it's super easy and fun to sign up for the extra bonus content. We'll spread bodily fluids on Jesus for your love and support. Please avoid checking out this embarrassing merchandise!
Labels: cult movies Dario Argento Junk Food Dinner Oliver Reed Opera patreon picks Podcast Superstition The Devils Vanessa Redgrave