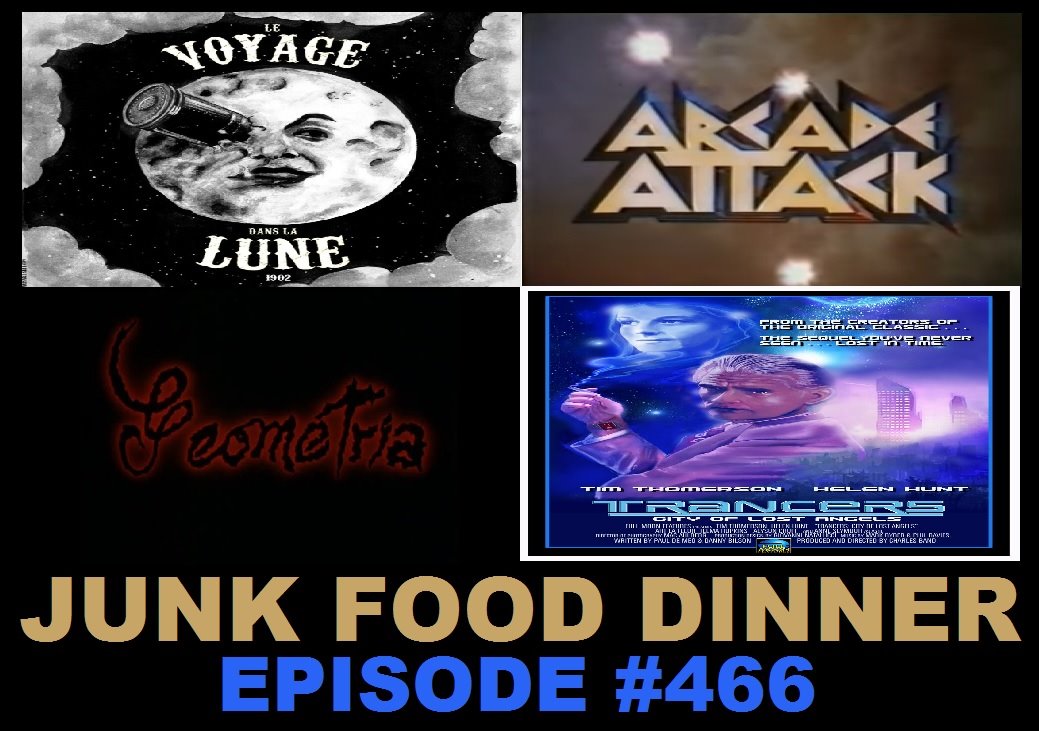 What's up, shorties? This week's menu features some well done bits of abbreviated cinema, a medium amount of technical glitches, and other rare occurences - including but not limited to the appearance of our Brother Mark Freado, the inclusion of a fourth film on the show, and most shockingly: two colons. That's right - this month's SHORT FILMS episode of JFD is here and ready to blow (those two colons)!


Up first! Way back in the pre-9/11 days of yore, there was a charming and talented Frenchman named Georges Méliès. Way back around the turn of the century (no, that other century), this guy had the smart idea to throw the still-new-as-a-literary-genre concepts of Science Fiction up onto the silver screen. The result (among several hundred more) is of course 1902's A Trip to the Moon! Will this be the oldest movie JFD ever reviews? It seems likely. Watch here first and then listen along with us!

Next up! It's the rarely-discussed 1982 British semi-documentary Arcade Attack: Silver Ball Heroes vs. Video Invaders,. It's a movie we've watched and you'll hear about it. I can tell you this now: it's got some killer animation, surprisingly. Also, look out for pinball related full-back tattoos! Watch here first and then listen along with us!

And then! Did y'all know that Guillermo del Toro was making short films back in '87? I didn't, either. At least until we reviewed the weird/stylish Exorcist-esque Geometria from 1987 - and it was an eye-opener. You'd think we'd be satisfied with just this many reviews, but you'd be wrong! Watch here first and then listen along with us!

Finally! It's a third movie: Trancers: City of Lost Angels, the 1988 short films from famed schlock master Charles Band. Originally produced as a segment for an unreleased anthology film (seems like a popular Band move), this thing's got Sarah Palmer from Twin Peaks in it! It might not actually have any Trancers, though - we can't really be sure. Watch here first and then listen along with us!


All this plus an official Ghoul Summer update, Kevin hates John Wick, checkin' with the dead bodies in junkfooddinnerland, The Return of the Boob Scale (tm), Kevin is turned off by Fred Armisen, do the kids care at all about Mortal Kombat anymore?, a rundown of the classic novelizations of Shaft, Kevin hates Crank, Topsy the Elephant (cue the applause), science v wizardry, nose whistling, our weekly news plus Blu-ray Picks and you're still too slow!

Also, if you like the show, please take a minute and subscribe and/or comment on us on iTunes, Stitcher, Blubrry or Podfeed.net. Check us out on Facebook and Twitter! We'd love to see some of your love on Patreon - it's super easy and fun to sign up for the extra bonus content. We'll bop moon-men on the head with umbrellas for your love and support. Please avoid checking out this embarrassing merchandise!
Labels: A Trip to the Moon Arcade Attack: Silver Ball Heroes vs. Video Invaders Charles Band Geometria Georges Méliès Trancers Trancers: City of Lost Angels video games