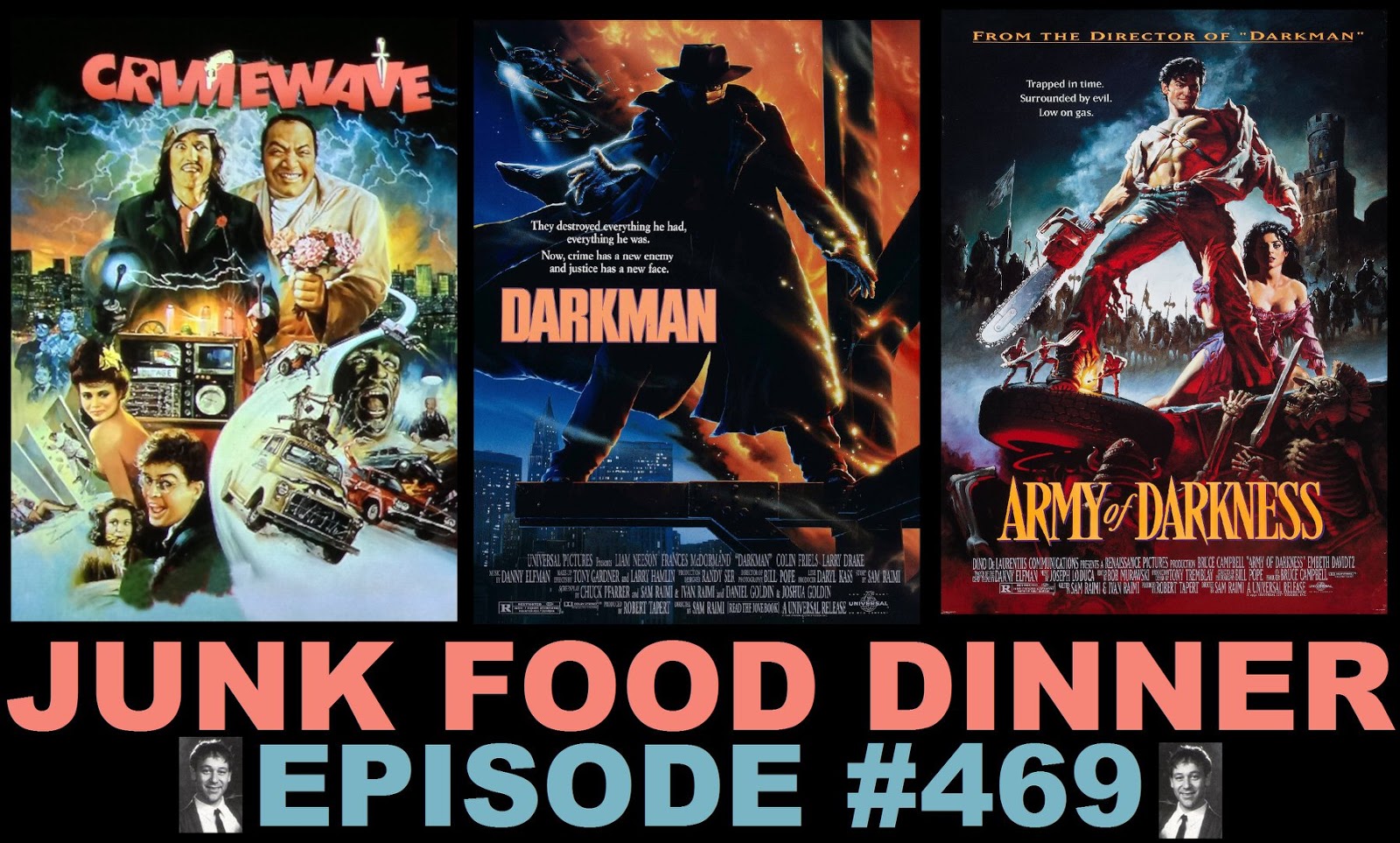 This week, we kick off the Summer of Sam (Raimi, that is)! So pack up the Oldsmobile and groove along with us to some classic jams from the slapstick indie genre darling of our youths!


Up first! It's the semi-forgotten feature that Sam Raimi and Bruce Campbell put together shortly after The Evil Dead and before its first sequel. Not a horror film, but more of a slapstick comedy slash film noir parody slash Looney Tunes live-action tribute slash murder mystery slash action movie, or something. Of course, we're talking about 1985's Crimewave, which by the way features a meaty role for character acting legend Brion James.

Next up! It's Old Sam's take on Universal Monsters and Golden Age Superheroes, with a dash of Mission Impossible thrown in for fun. We're chatting of course about 1990's Darkman, the one about the guy with the burned face and the masks.

Finally! It's a third movie: Army of Darkness, the 1992 feature that you might have heard a thing or two about. It's the final Evil Dead movie ever made or associated with that franchise, and once again stars Bruce Campbell as Ash Williams. But does it feature any deadites?


All this plus for the love of old men, a Dave Chappelle update, a Bushwick Bill in memoriam, Kevin Moss reveals some Halloween staples in his house, no steamed hams (this time), a Ghoul Summer update in the form of an unsettling health update, a semi-ardent Švankmajer supporter, a steamin' heap of junkmail, Swamp Thing was a thing?, Parker claims there are too many DC Superhero movies being released, Parker Bowman tells us how he really feels about Steven Spielberg, we're sorry to Massacre Video for goofing on a movie they're releasing, the kinds of crime that Parker's into, our weekly news plus Blu-ray Picks!

Also, if you like the show, please take a minute and subscribe and/or comment on us on iTunes, Stitcher, Blubrry or Podfeed.net. Check us out on Facebook and Twitter! We'd love to see some of your love on Patreon - it's super easy and fun to sign up for the extra bonus content. We'll give you some sugar for your love and support. Please avoid checking out this embarrassing merchandise!
Labels: Army of Darkness Brion James Bruce Campbell Crimewave Darkman Sam Raimi Summer of Sam