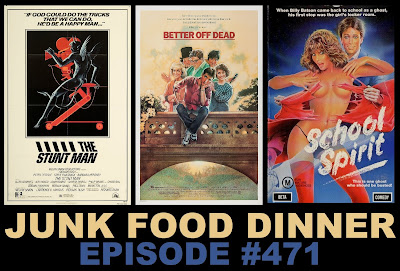 This week on JFD, gentlemen and ladies, the Patreon picks are all about the 80's.

Up first, Steve Railsback is a Vietnam vet and fugitive on the run who stumbles onto the set of a World War I movie being made by Peter O'Toole, who offers him an opportunity to hide-out on his set if agrees to replace their stunt man who has recently died. While on the lamb Railsback learns a thing or two about stunt work and falls in love with the film's star played by Barbara Hershey in 1980's The Stunt Man.

Then, John Cusack plays a high school kid obsessed with his girlfriend until she dumps him for the captain of the ski team, sending him into a suicidal funk until he meets the local French foreign exchange student played by Diane Franklin in Better Off Dead from 1985 directed by Savage Steve Holland.

All this plus witty banter between friends, we discuss the new Charles Play movie and Sean recounts his real life run-in with Young Charles, $27 plastic fork toys, Dom DeLuise vs Paul Prudhomme chat,  a call from our grandpa  and so much more.

Got a movie suggestion for the show, or better yet an opinion on next week's movies? Drop us a line at JFDPodcast@gmail.com. Or leave us a voicemail: 347-746-JUNK (5865). Add it to your telephone now! JOIN THE CONVERSATION!
Also, if you like the show, please take a minute and subscribe and/or comment on us on iTunes, Stitcher, Blubrry or Podfeed.net. Check us out on Facebook and Twitter! We'd love to see some of your love on Patreon - it's super easy and fun to sign up for the extra bonus content. We become unwitting superheroes via your love and support. Please avoid checking out this embarrassing merchandise!