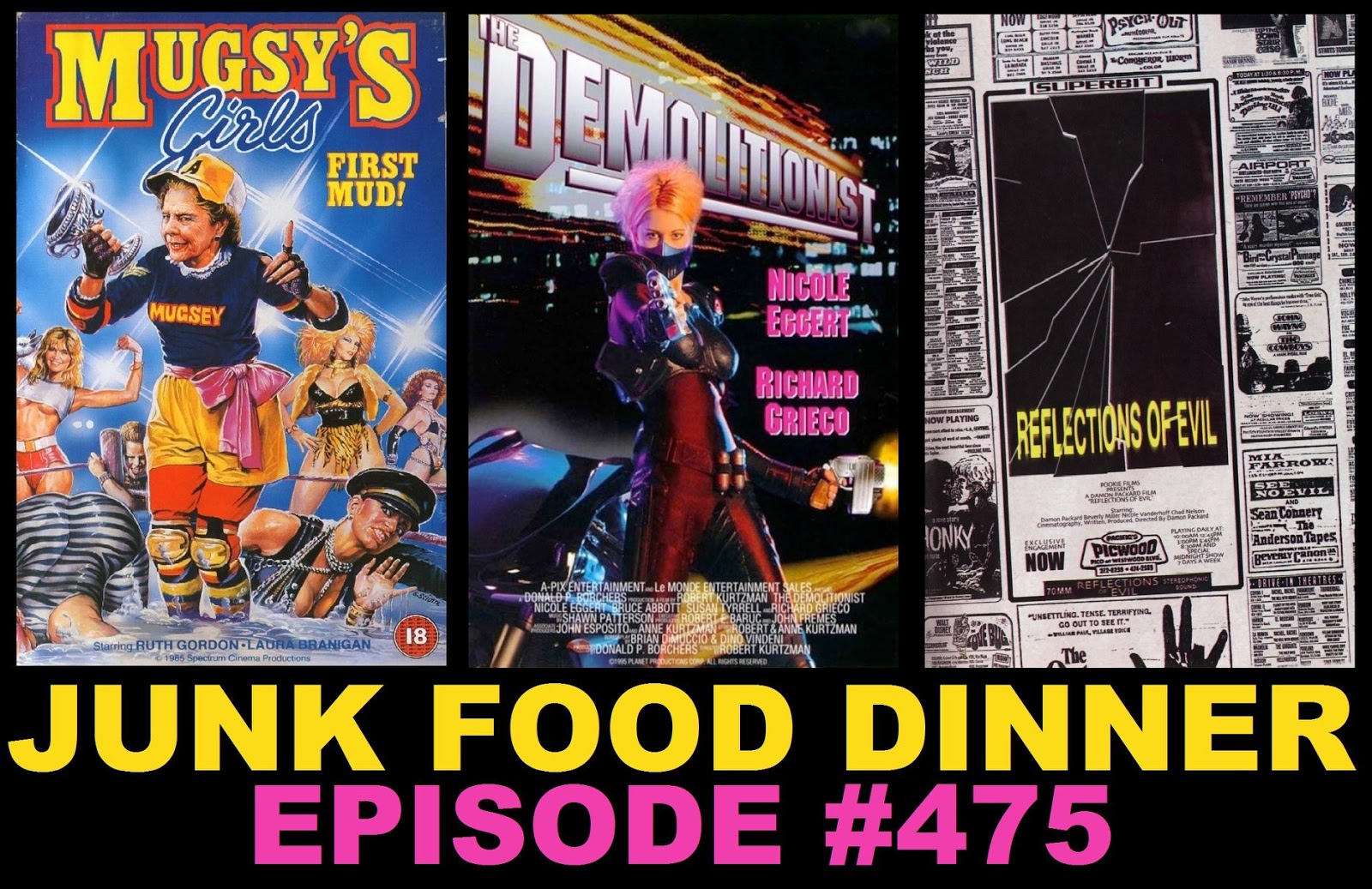 Rest easy, friends! We're all in much better hands this week - the Junk Food Dinner gang is being joined by the one and only Jason Frisbie to review yet another trio of weird films!

Next up! We check in with our old friend Nicole Eggert (Baywatch) and see what kinda Barbed Wire esque adventures she can get up to (a year before Pam Anderson gets around to it), in The Demolitionist, from 1995. It's a RoboCop kind of a thing with a bit of Terminator and some other big sci-fi/action concepts thrown in, but cheaply. You might enjoy it. Directed by Robert Kurtzman!

Finally! It's a third film: Reflections of Evil, Damon Packard's directorial debut, from 2002. This much heralded low-fi indie film has some cult movie critics proclaiming it to be a filmic equivalent of Merzbow (in a good way), while others are claiming it to be equivalent to Merzbow (in a bad way). Check it out for yourself or listen to what we thought of this noise.


All this plus superior posters, scalin' back wild claims, Warhammer Chat, Fear and Loathing in Dad Vegas featuring: a much-awaited Kentucky Hot-Brown follow-up, forearm gravy, the only street in Fairborn Ohio, Rat People are the something of something else, the secret to Kevin's signature hair, listener junkmails from our goofy pals, background poochie, greasing the palms, 4 child-less men in their 30's discuss theme parks, background fist fights, clever meta-premises, a hankerin' for critters, our weekly news plus Blu-ray Picks and even more!

Also, if you like the show, please take a minute and subscribe and/or comment on us on iTunes, Stitcher, Blubrry or Podfeed.net. Check us out on Facebook and Twitter! We'd love to see some of your love on Patreon - it's super easy and fun to sign up for the extra bonus content. We'll roam sidewalks endlessly for your love and support. Please avoid checking out this embarrassing merchandise. This week's episode edited exclusively during sleeping hours!
Labels: Damon Packard Mugsy's Girls nicole eggert Reflections of Evil Robert Kurtzman ruth gordon The Demolitionist