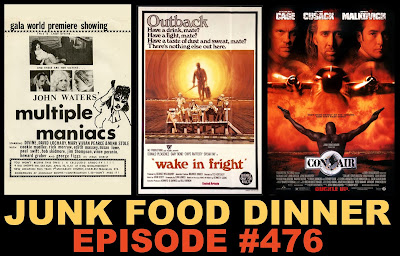 We're back with three flicks from our Patreon Buddies!

First, John Waters, Divine and the whole crew get sleazy and weird. Divine plays a freakshow performer with a violent streak in "Multiple Maniacs."

Next, directed by the guy who brought us "Rambo" and "Weekend at Bernie's," comes "Wake in Fright" -- an Ozploitation classic about a teacher who devolves into a debaucherous creep while on Christmas break.

Finally, Nick Cage plays a guy with some kind of accent in "Con Air." You know this movie. A bunch of actors you like are shirtless on a plane.

All this plus news about the new Ghoul Summer shirt, apologies, threats, DVDs, Nerd News, Junk Mails, Rutger Hauer chat, a talking goat, Sweetman and so much more!