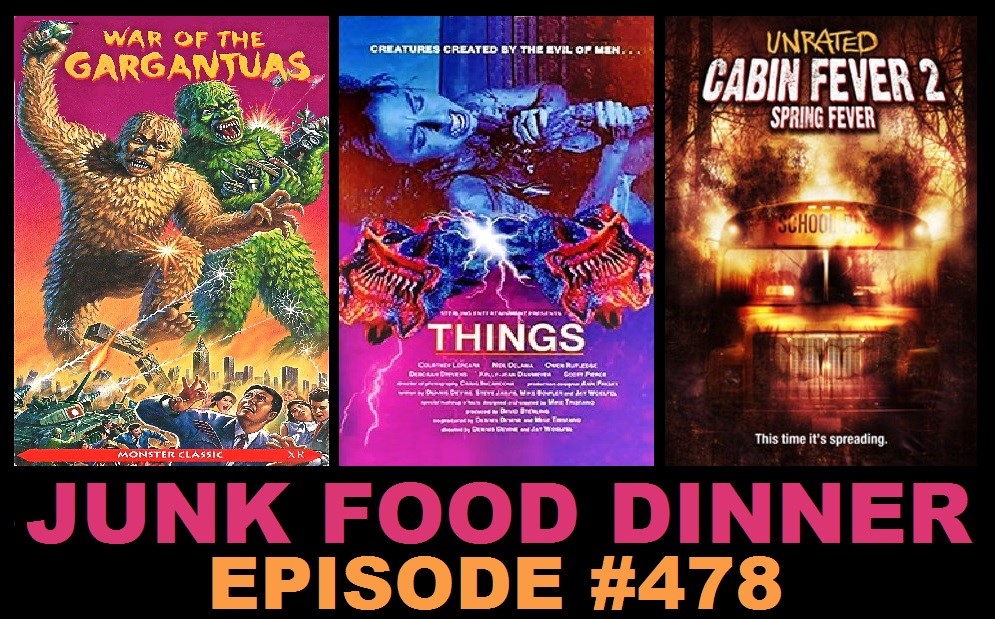 This week, we're righting wrongs and saluting our patrons - that's right, it's your monthly Dom Deluise Club theme show, where we review three movies chosen by our listeners!


Up first! It's last of the UPA/Toho collaborations, and the first/only semi-sequel to Frankenstein Conquers the World - of course, we're talking about 1966's War of the Gargantuas, the bizarre double-Frankenstein-themed kaiju (giant monster) feature from director Ishirō Honda (of original Godzilla fame). And you thought that original Mothra movie was weird! Shout-out to Kevin E for suggesting it!

Next up! Eagle-eared and sharp-minded podcast listeners might recall a legendary gaffe made in the earliest days of this historic podcast, in which intrepid purveyor of film criticism Parker Bowman accidentally watched the wrong movie named Things, back on episode #87 (LISTEN HERE). So, this week Kevin and Sean will be reviewing Things from 1993, and Parker will finally get to share his musings on the 1989 Barry Gillis classic. Thanks Evan G for the suggestion!

Finally! It's a third film: Cabin Fever 2: Spring Fever (2009), which is one of those flesh-eating-bacteria-in-bottled-water-slowly-melts-the-occupants-of-a-highschool films. You know the type. The real goopy ones. And check out that soundtrack! Directed by Ti West, who tried (and failed) to Alan Smithee this joint. Kudos to Justin for sending it our way!


All this plus more Dave Chappelle chat, alley-way film screenings, righting all the wrongs, revelations about Kevin Moss's text-messaging proficiency, fact-checking Dolemite biopic location accuracy, racist cat names, taking out the 'u', the tricky politics of modern film distribution, our weekly news plus Blu-ray Picks and even more!

Also, if you like the show, please take a minute and subscribe and/or comment on us on iTunes, Stitcher, Blubrry or Podfeed.net. Check us out on Facebook and Twitter! We'd love to see some of your love on Patreon - it's super easy and fun to sign up for the extra bonus content. We'll correct any and all historical podcasting blunders for your love and support. Please avoid checking out this embarrassing merchandise.
Labels: Barry J. Gillis Cabin Fever 2: Spring Fever Jay Woelfel Junk Food Dinner Kaiju Podcast Things Ti West Toho War of the Gargantuas