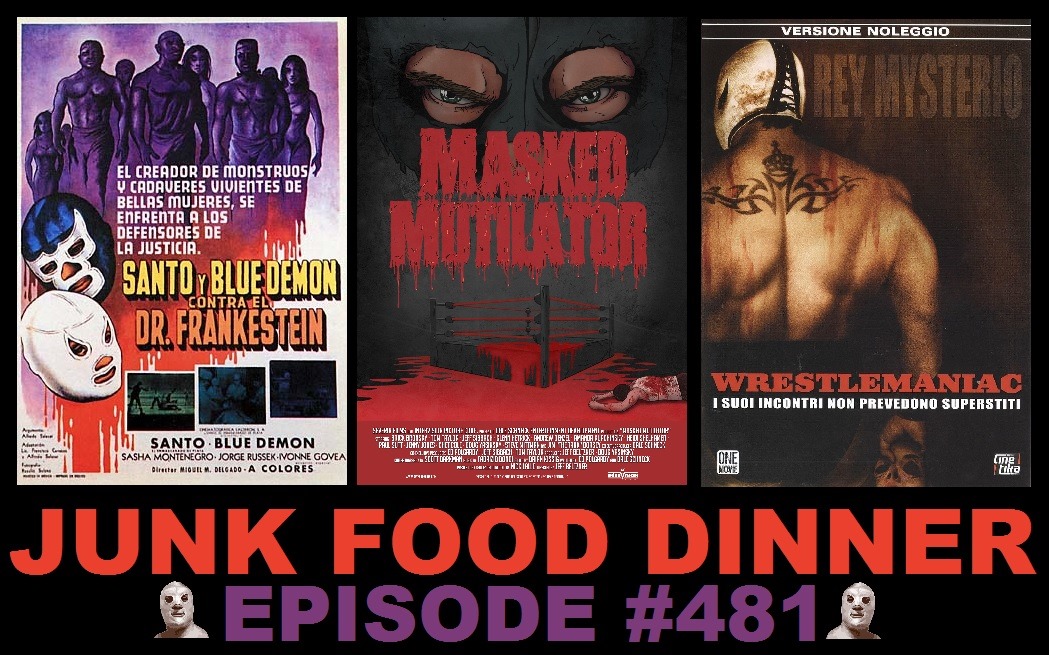 This week, we're slapping on the veil and stepping in the ring - that's right, it's our Masked Wrestler Horror theme show, where we review three scary movies featuring grapplers in disguise!


Up first! Doctor Irving Frankenstein is up to some brain-transplanting no good and it's up to a couple of very famous luchadors to stop him in the bizarre Mexican crossover Santo and Blue Demon Versus Doctor Frankenstein (aka Santo y Blue Demon contra el doctor Frankenstein), from 1974. Featuring real-ass authentic Mexican wrestling action, and fictional vampires!

Next up! Way back in 1994, a handful of local wrestlers and aspiring filmmakers grinded out some weekends in the back woods of Pennsylvania, with the simple hope of bringing the world a masked-wrestler-horror film called Masked Mutilator. For reasons, it was never completed/released. But now, Severin Films is proud to announce this long-forgotten slice of rural moviemaking can be viewed by audiences willing and otherwise. And we're proud to announce we've reviewed it right here on the show.


All this plus more yet another guest wistfully reminenscing about the party at Parker's place where people peed (in a wall), Parker makes Kevin an F5-related promise he might not be prepared to keep, no fun in the central California valleys, grapplechats, a current theatrical horror round-up, a glorious embrace of the return of the Boob Scale, a junkmail from a good old friend (likely drunk), respect for the elderly, Musical Sweetman, confusion from down under, fast food news chew can use, It Part 2 (whatever), what a Parker wants, the world according to the Scoobypedia, a Batty Call, our weekly news plus Blu-ray Picks and even more!

Also, if you like the show, please take a minute and subscribe and/or comment on us on iTunes, Stitcher, Blubrry or Podfeed.net. Check us out on Facebook and Twitter! We'd love to see some of your love on Patreon - it's super easy and fun to sign up for the extra bonus content. We'll sit-out powerbomb straight into a pinfall for your love and support. Please avoid checking out this embarrassing merchandise.
Labels: Junk Food Dinner lucha libre Masked Mutilator Masked Wrestler Horror Podcast Santo and Blue Demon Versus Doctor Frankenstein Wrestlemaniac