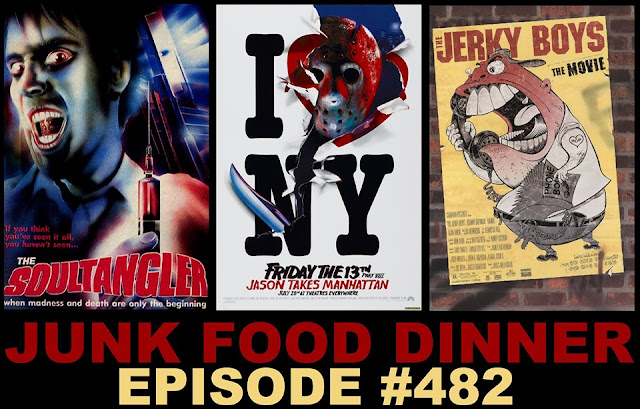 We're back with another round of movies picked by our Patreon Friends.

First, an evil Herbert West-like doctor finds a way to detach one's soul and put it into a corpse in 1987's "Soul Tangler."

Next, everyone's favorite hockey mask-wearing slasher goes on a cruise to New York in "Friday the 13th 8: Jason Takes Manhattan" from 1989.

Finally, we've got lamby nipple chops as two losers from Queens get themselves involved with the mob after a crank phone call in "The Jerky Boys."

All this plus DVDs, Nerd News, Junk Mails, Sweetman Chat, Chaki, Tom from Adelaide, Disney Land Chat, Does It: Chapter 2 sucks?, Evil Bong Chat and so much more!

Maybe it's not too late for you to hustle on over to Hide the Bodies and pick up a new Ghoul Summer T-shirt, huh?

Or go check out our Patreon and then you can pick the movies.