JFD508: Ticks, The Dentist, Faust: Love of the Damned 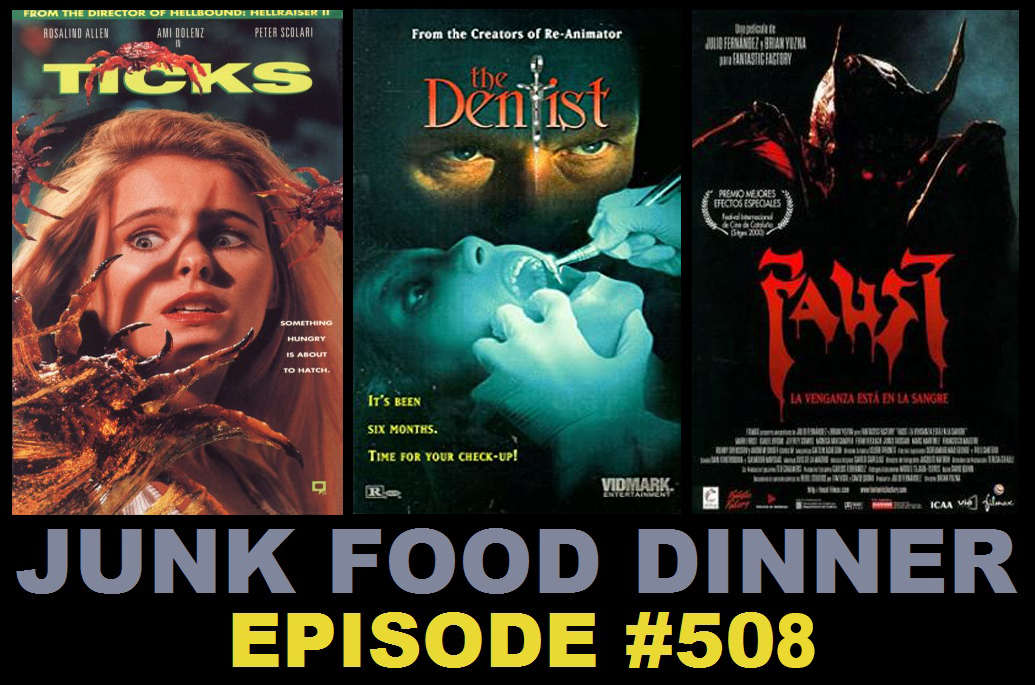 It's a history-making week in more ways than one as we're releasing this week's episode earlier than ever before! Is Sunday even really a part of the week?! Anyhow, we thought this Brian Yunza tribute show was too good to let the apocalypse ruin, and wanted you to hear it before the world ends. Please savor our reviews of three weird & wild flicks from Mr. Yunza for this entire week, or until the human race goes extinct (whichever comes first).


Up first! We pull the old switcharoo and highlight one of Brian Yunza's producing (rather than directing) efforts, a perhaps under-appreciate little B-movie (and by that we mean, little bug movie), 1993's Ticks! It's got marijuana themed hijinks, a wild cast including Amy Dolenz, Seth Green, Carlton, and Clint Howard - plus buckets of insectoid gore! Not suggested for squares.

Next up! Y'all ever seen 1996's The Dentist? It's a sleazy late night thriller sort of affair with Corbin Bernsen as a Beverly Hills dentist gone postal. You might be surprised at the amount of gore scenes you can fit into a dentist's office. Keep your eyes peeled for character actor Earl Boen!

Finally! It's a third film: Faust: Love of the Damned, from the year 2000. An intense, high-energy, heavy-metal themed dark/edgy take on the superhero world, this low budget Spanish production appeals primarily to the Parker Bowman demographic.


All this plus YOUR regularly scheduled Cactus League Baseball / Minor League Hockey / Mick Foley update, Kevin's gone Invisible, speaking of marks, the dirt on Dublin Dr Pepper, a classic assortment of Junkmailers, ruthless metal straw slander, did we mention there's a coronavirus?, buggin' out at the Skyline, our weekly news plus Blu-ray Picks and even more!

Also, if you like the show, please take a minute and subscribe and/or comment on us on iTunes, Stitcher, Blubrry or Podfeed.net. Check us out on Facebook and Twitter! We'd love to see some of your love on Patreon - it's super easy and fun to sign up for the extra bonus content. We'll schedule a root canal for your love and support. Please avoid checking out this embarrassing merchandise.
Labels: Amy Dolenz Brian Yuzna Clint Howard Coronavirus Faust: Love of the Damned jeffrey combs Seth Green The Dentist Ticks