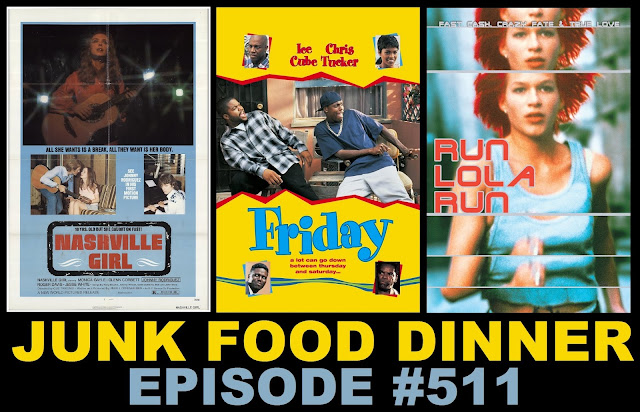 Once again, JFD is here in your time of need. We're showing up to your place with a pizza, a six-pack of beer and three random-ass flicks.

Up first, we have a hicksploitation flick from Roger Corman's New World Pictures about a young girl (Monica Gayle from Switchblade Sisters) who leaves her country home for a shot at country music stardom in Nashville, only to find the way to the top is fraught with sexual assault in 1976's Nashville Girl.

Then, Ice Cube and Chris Tucker play a couple of slackers in South-Central L.A. who hang out on their porch, smoke weed and try to avoid the stereotypical trappings of the hood in the 90's cult comedy classic Friday from 1995.

And finally, we take a look at the highly-stylized German crime thriller Run Lola Run from 1998 about a young woman who has 20 minutes to get $100,000 and get to her boyfriend before he's killed by gangsters.

All this plus ways you can help independent cinemas during the pandemic, Sean's new clothing choices, The Fallen One's take on the state of horror re-makes, what cereal Sean's been eating, the hottest new blu-rays, 90's nostalgia and so much more!

Also, if you like the show, please take a minute and subscribe and/or comment on us on iTunes, Stitcher, Blubrry or Podfeed.net. Check us out on Facebook and Twitter! We'd love to see some of your love on Patreon - it's super easy and fun to sign up for the extra bonus content. We will escape our invisible corporate overlords with your love and support.