JFD517: Galaxy of Terror, I, The Jury, The Happiness of the Katakuris 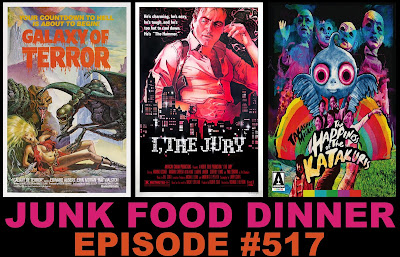 Junk Food Dinner's back to help you get through another week of quarantine! This week we have three very strange movies picked by the lunatics that are our Dom DeLuise Patreon donors!

Up first, Roger Corman's New World Pictures serves up a rip-off of Alien that aims to be gorier and sleazier than it's source material with Galaxy of Terror from 1981, featuring an all-star cast of b-movie actors, including; Robert Englund, Ray Walston, Sid Haig, Erin Moran, Zalman King, Grace Zabriskie and Edward Albert.

Then, Armand Assante plays hard-boiled cop Mike Hammer in an 80's-upped remake of a 1950's noir flick in which while investigating the death of his friend, he stumbles upon a sex clinic run by Barbara Carrera that's more escort service than medical practice and it has criminal ties that go all the way to the top in I, The Jury from 1982.

And finally, Takashi Miike brings us a story about a four-generation family that despite their own personal issues, band together to open a bed & breakfast on the Japanese mountainside. However, their customers keep dying in odd ways, but instead of calling the cops, the family hides the bodies as not to hurt their already struggling business. Oh yeah, there's also claymation and musical numbers sprinkled throughout in the very weird The Happiness of the Katakuris from 2001.

All this plus hot mask fashions, a call from The Fallen One, updates from the drive-in, film festivals coming to your house, this week's goofiest blu-rays and so much more!

Also, if you like the show, please take a minute and subscribe and/or comment on us on iTunes, Stitcher, Blubrry or Podfeed.net. Check us out on Facebook and Twitter! We'd love to see some of your love on Patreon - it's super easy and fun to sign up for the extra bonus content. We will escape our invisible corporate overlords with your love and support.
Labels: Armand Assante Galaxy of Terror I The Jury Mike Hammer Ray Walston Robert Englund Roger Corman Sid Haig Takashi Miike The Happiness of the Katakuris