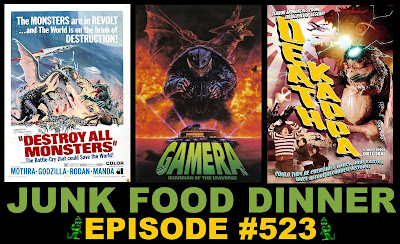 JFD is back to heat up your summer even more as we kick off July with a variety of Kaiju action. That's right, it's Kai-Ju-ly!

Up first, one of the most famous giant monster battles of all time, Destroy All Monsters from 1968 features a veritable who's who of Kaiju including; Godzilla, Rodan, Anguirus, Gorosaurus, Mothra, Minilla, Manda, Kumonga, Baragon, Varan and King Ghidorah!

Then, Japan's other favorite giant monster Gamera returns after a 15-year hiatus in 1995's Gamera: Guardian of the Universe, where he must save Tokyo from an invading plague of giant pterodactyls with the help of Steven Seagal's daughter.

And finally, a kappa (a turtle-like goblin from Japanese folklore) grows to enormous size from an atomic blast to do battle with another giant monster in the kaiju parody Death Kappa from 2010.

All this plus video games where you do work, another in-depth discussion on retroactive censorship, an update on the cats in Sean's backyard, action figure chat, this week's most notable blu-rays and so much more!

Also, if you like the show, please take a minute and subscribe and/or comment on us on iTunes, Stitcher, Blubrry or Podfeed.net. Check us out on Facebook and Twitter! We'd love to see some of your love on Patreon - it's super easy and fun to sign up for the extra bonus content. We will defeat the evil giant monsters with your love and support.