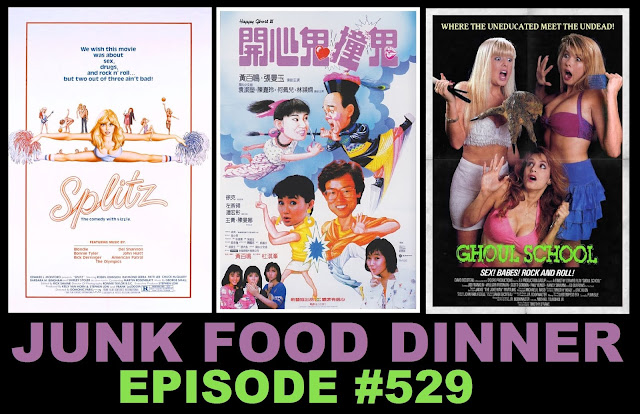 Hey, I heard you missed us, we're back! I brought my pencil! Gimme something to write on, man. This week JFD decides to skip the grossness of Ghoul Summer and instead focuses on the charms of education on film as we celebrate School Summer instead!

Up first, we enroll at Hooter University and follow the antics of an all-female rock group who help a struggling sorority in a series of sporting competitions in order to save their house, all while trying to book gigs and launch their careers in Splitz from 1982.

Then, we jump right into the third installment in the wacky supernatural Chinese comedy series Happy Ghost to find a young female ghost trying to get reincarnated but also getting accidentally thwarted by a bumbling music teacher in Happy Ghost III from 1986.

And finally, two horror nerds must defend their high school from a plague of zombified members of the swim team, all while plugging the shit out of Jackie "The Joke Man" Martling for some reason, in 1990's Ghoul School.

All this plus stories from grade school, open sores, an update on Parker's fear of being seen pooping, Nerd News, this week's most notable blu-rays and so much more!

Also, if you like the show, please take a minute and subscribe and/or comment on us on iTunes, Stitcher, Blubrry or Podfeed.net. Check us out on Facebook and Twitter! We'd love to see some of your love on Patreon - it's super easy and fun to sign up for the extra bonus content. We will finally graduate with your love and support.