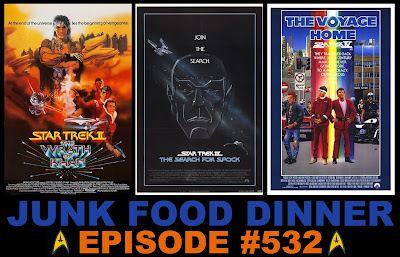 The listeners demanded it, so here we boldly go where no podcast has gone before, into The Summer of Spock! To celebrate the festivities, we beam up director Jackson Stewart (Beyond the Gates) to discuss the 3 most (in)famous Star Trek flicks!
Up first, in Star Trek II: The Wrath of Khan from 1982, Captain Kirk (William Shatner) has to face off against an old foe (Ricardo Montalban) but pays the ultimate price when Dr. Spock (Leonard Nimoy) parishes in the battle.
Then, as it turns out maybe Spock isn't dead after all. Maybe he has regenerated as a rapidly aging boy on a distant planet. Maybe if Captain Kirk and crew can steal a ship and find him and get him to Vulcan he can live again.That is, if a group of Klingons (lead by Christopher Lloyd) don't show up and fuck things up in Star Trek III: The Search for Spock from 1984.
And finally, the crew of the Starship Enterprise has to travel back to the late 20th century to steal some humpback whales that can communicate with an alien probe that's threatening to blow up Earth in Star Trek IV: The Voyage Home from 1986. Yes, this is the one where Spock does the Vulcan nerve pinch on the punk rocker on the bus.
All this plus our history with The Trek, tales from the drive-in, Wilford Brimley's secret history, sad Nerd News, this week's blu-ray releases and so much more!
LISTEN NOW:
MP3 Direct Donloyd
Also, if you like the show, please take a minute and subscribe and/or comment on us on iTunes, Stitcher, Blubrry or Podfeed.net. Check us out on Facebook and Twitter! We'd love to see some of your love on Patreon - it's super easy and fun to sign up for the extra bonus content. We will find Spock with your love and support.
Labels: Christopher Lloyd Jackson Stewart Leonard Nimoy Spock Star Trek The Search for Spock The Voyage Home The Wrath of Khan William Shatner