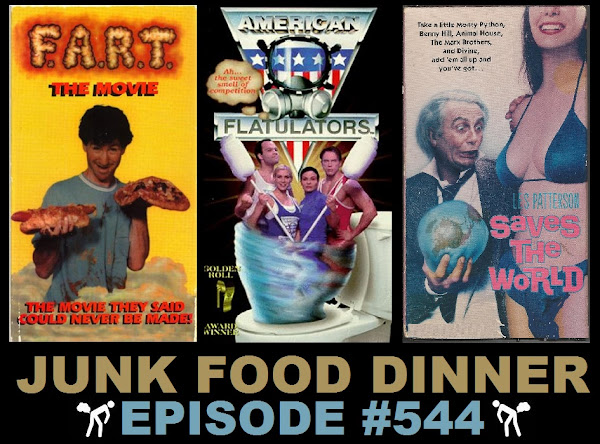 Happy Fartsgiving, everyone! We know that a day full of stuffing your face with meats, veggies and carbs is certainly going to lead to some intestinal discomfort. So we're here to wallow in the stinky aftermath with you and we've brought along three fart-centric "films" to help pass the time (and the gas).
Up first, we have a tape so outrageous for the first several years of its existence, you could only get it in novelty shops! Of course we're talking about the notorious F.A.R.T. The Movie from 1991, starring Joel Weiss as Russell, a dude who's two favorite things in life are watching TV and farting. But when his wife leaves him at home on New Year's Eve to watch nothing but fart-related programming, will he have a change of heart (or change of farts)?
Next, we take a look at a 50-minute parody of then-popular American Gladiators TV show titled American Flatulators from 1995. It's just like Gladiators but all the competition is based around, you guessed it, farting.
And finally, we take a look at the film that essentially killed the Australian film industry with one big fart, Les Patterson Saves the World from 1987. It stars infamous Aussie gross-out humorist Barry Humphries and the titular Patterson (as well as his alter ego Dame Edna Everage) as he acts as a diplomat to the Middle East and inadvertently saves the world from biological warfare.
All this plus Sean's love of Peacock, Parker getting down with the sickness, a call from the Ghost of Norman Bates, inappropriate Monty Python stories, Freddy Krueger news, the hottest blu-rays of the week and so much more.
LISTEN NOW:
MP3 Direct Donloyd
Also, if you like the show, please take a minute and subscribe and/or comment on us on iTunes, Stitcher, Blubrry or Podfeed.net. Check us out on Facebook and Twitter! We'd love to see some of your love on Patreon - it's super easy and fun to sign up for the extra bonus content. We will pass this gas with your love and support.
Labels: American Flatulators Barry Humphries F.A.R.T. The Movie fart farts flatulence Joel Weiss Les Patterson Saves the World