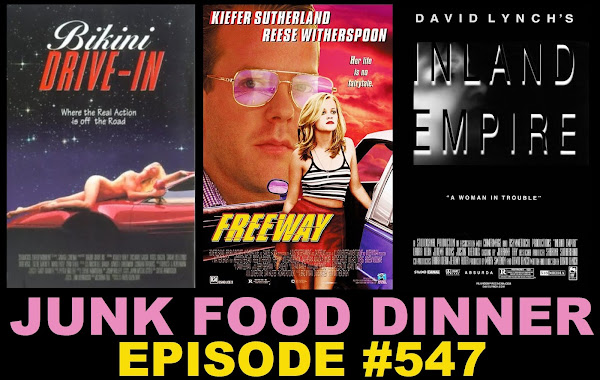 We're getting close to putting a bow on 2020 and wrapping up this God-forsaken year, so for our second-to-last show of the year, we're diving into three uniquely weird and sleazy flicks for a uniquely weird and sleazy year.
Up first, a young woman (Kim Taylor) inherits a struggling drive-in movie theater from her recently deceased grandfather. But when she realizes that the theater is in a ton of debt, she calls on her bikini-clad friends to help drum up business in Fred Olen Ray's Bikini Drive-in from 1995.
Then, Reese Witherspoon plays a troubled teen on the run after her abusive parents are sent to jail. When she runs afoul of Kiefer Sutherland, a serial killer and pedophile, she defends herself and almost kills him, but finds herself on the wrong side of the law in the sleazy adaptation of Little Red Riding Hood, Freeway from 1996.
And finally, we observe David Lynch at his Lynchiest in 2006's Inland Empire. A 3 hour epic, shot on a consumer-grade digital camera with Laura Dern as an actress slipping in and out of reality.
All this plus cereal news, the year that wasn't, Clockwork Orange theories, the death of Zeus, more Star Wars chat than Kevin is comfortable with, the hottest blu-rays of the week and so much more.
LISTEN NOW:

MP3 Direct Donloyd
Also, if you like the show, please take a minute and subscribe and/or comment on us on iTunes, Stitcher, Blubrry or Podfeed.net. Check us out on Facebook and Twitter! We'd love to see some of your love on Patreon - it's super easy and fun to sign up for the extra bonus content. We will make it to 2021 with your love and support.
Labels: Bikini Drive-in david lynch Fred Olen Ray Freeway Inland Empire Kiefer Sutherland Kim Taylor Laura Dern Reese Witherspoon