JFD550: That Man From Rio, The Rift, China O'Brien 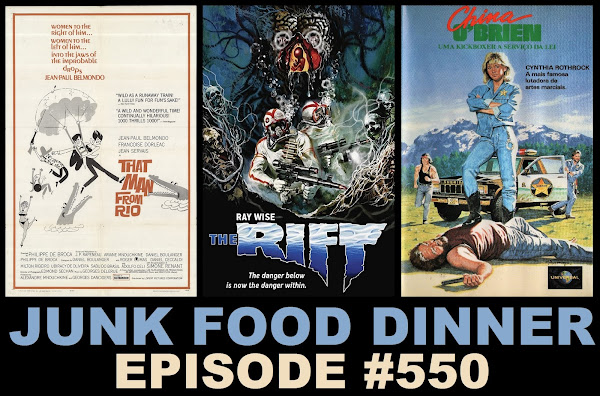 JFD is back and this week, it's action packed! Alright, maybe not packed. In fact, there's some pretty boring parts in all these movies. But still, there's definitely some action in there!
Up first, Sean tries to convince Parker that the French can be cool by exhibiting That Man From Rio from 1964. An action-adventure film directed by Philippe de Broca and starring Jean-Paul Belmondo (the same team that brought us Le Magnifique), its about a guy on military leave and the daughter of a murdered man who go on adventure to Brazil to find some stolen ancient statues that could hold the secret to a lost treasure.
Next, we have The Rift from 1990, the tale of a crew of a submarine who go looking for the crew of another submarine mission who have gone missing, but when they discover a secret experiment and a whole lot of weird ocean-dwelling creatures, things begin to go wrong real quick.
And finally, we have martial artist Cynthia Rothrock in her first starring role in an American film, China O'Brien, about a female cop who leaves the big city for her small Utah hometown, only to find it overrun with low-lives and thugs. Shot in 1988 but shelved for 2 years and released directly to video, it didn't necessarily make Rothrock a household name, but did introduced her into our hearts.
All this plus getting ripped off on pixels, David Arquette disappoints, political anger, film babes back from the dead (then dead again), more Star Wars chat than Kevin is comfortable with (again), the hottest blu-rays of the week and so much more.
LISTEN NOW:
MP3 Direct Donloyd
Also, if you like the show, please take a minute and subscribe and/or comment on us on iTunes, Stitcher, Blubrry or Podfeed.net. Check us out on Facebook and Twitter! We'd love to see some of your love on Patreon - it's super easy and fun to sign up for the extra bonus content. We will clean this town up with your love and support.
Labels: China O'Brien cynthia rothrock Jean-Paul Belmondo Juan Piquer Simón Philippe de Broca R. Lee Ermey Ray Wise Robert Clouse That Man From Rio The Rift