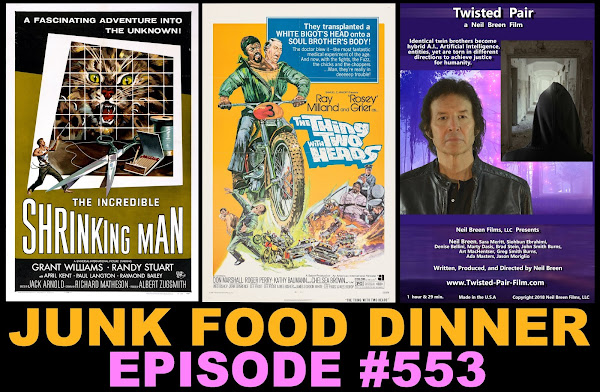 This week we kick off what has become a favorite month here on JFD; Sci-Fi-ebruary! An entire month dedicated to science fiction films of all sizes, shapes and budgets!
Up first, legendary sci-fi director Jack Arnold (Creature from the Black Lagoon, Tarantula) teams up with legendary sci-fi writer Richard Matheson (I Am Legend, The Twilight Zone) for The Incredible Shrinking Man from 1957 about a man who begins to grow smaller and smaller after being exposed to a mysterious mist.
Then, classic schlockmeisters AIP bring us The Thing with Two Heads from 1972, about a dying surgeon (Ray Milland) who also happens to be a racist, who gets his head transplanted on a black death row inmate (Roosevelt "Rosie" Grier) in an attempt to extend his life. But when things don't go as planned, the two headed experiment will lead police on a chase across the California countryside.
And finally, ultra-low-budget filmmaker Neil Breen graces us with another one of his pet projects where he stars, writes, directs and does pretty much everything else in Twisted Pair from 2018 about a set of twin brothers (both played by Breen), one who is enlightened with AI and one who is addicted to pills and booze.
All this plus Parker disciplining his new dog, a spat of celebrity deaths, Amber alerts for Young Charles, the hottest blu-rays of the week and so much more.
LISTEN NOW:
MP3 Direct Donloyd
Also, if you like the show, please take a minute and subscribe and/or comment on us on iTunes, Stitcher, Blubrry or Podfeed.net. Check us out on Facebook and Twitter! We'd love to see some of your love on Patreon - it's super easy and fun to sign up for the extra bonus content. We will never shrink to death with your love and support.
Labels: Jack Arnold neil breen Ray Miland Richard Matheson Rosie Grier The Incredible Shrinking Man The Thing with Two Heads Twisted Pair