JFD559: The Black Hole, Dr. Otto and the Riddle of the Gloom Beam, Tiptoes 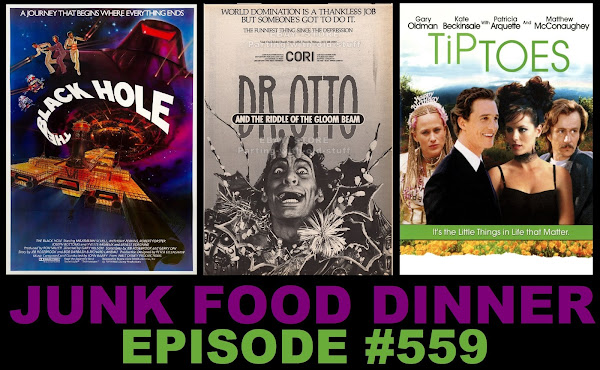 Once again, we relinquish control of our picks to the distinguished tastes of our Dom DeLuise Patreon donors. This week they give a real mixed bag of notorious films.
Up first, Disney assembles an all-star cast (Anthony Perkins, Robert Forster, Yvette Mimieux, Ernest Borgnine) and a hefty budget to try and get in on the Star Wars craze of the late 70's with The Black Hole from 1979 but ended up with an under-performing dud but which still has cult fans to this day.
Next, did you know Jim Varney's first movie wasn't an Ernest movie? Well, it kind of was. It has Ernest in it, but only briefly. It's mostly about this other character, Dr. Otto (also played by Varney) who wants to wreak havoc on the world by destroying our financial institutions, starting with Cincinnati! It's called Dr. Otto and the Riddle of the Gloom Beam from 1985 and it plays kind of like an Ernest movie, but weirder. Much weirder.
And finally, we take a look at the infamous Tiptoes from 2003 in which Gary Oldman plays Matthew McConaughey's twin brother. Who is also a dwarf. The movie is often cited online as one of the worst/weirdest movies ever but is it really that weird?! We'll find out.
All this plus Kevin's trip to Boston, grandpa movie talk, Wal-Mart Exclusives, Nick Nolte chat, the hottest blu-rays of the week and so much more.
LISTEN NOW:
MP3 Direct Donloyd
Also, if you like the show, please take a minute and subscribe and/or comment on us on iTunes, Stitcher, Blubrry or Podfeed.net. Check us out on Facebook and Twitter! We'd love to see some of your love on Patreon - it's super easy and fun to sign up for the extra bonus content. We will never shrink to death with your love and support.
Labels: Anthony Perkins Dr. Otto and the Riddle of the Gloom Beam Ernest Borgnine gary oldman Jim Varney Robert Forster The Black Hole Tiptoes Yvette Mimieux