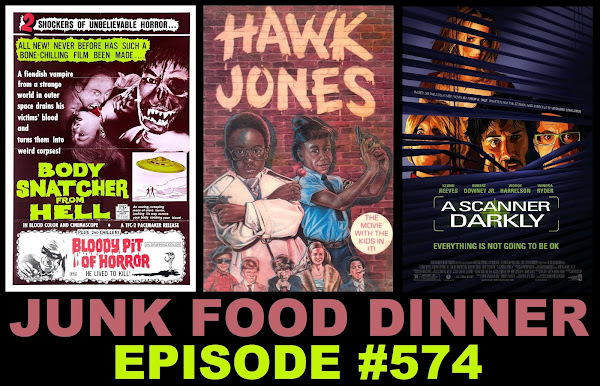 A few weeks back, we did a segment called Movie Hostage (shout out to Kissing Contest) where we presented 3 flicks to the other JFD boys and let them pick the ones we would watch. As a result we ended up with Japanese aliens, cops who are also little kids and rotoscoped drug addicts.
Up first, Hajime Satô directs a tale about a group of passengers on a plane that is set off course and crash lands in a remote area where aliens have landed and may also be body snatchers and vampires in the 1968 sci-fi classic Goke, Body Snatcher from Hell.
Next, two teenage brothers write and direct a hard-boiled cop drama, but there's a twist; the cast is made up entirely of 6 to 8-year-olds! Hawk Jones made a minor splash when it was released on VHS in 1986 but has since gained a sizable cult following thanks to the internet.
Finally, Richard Linklater casts Keanu Reeves, Robert Downey Jr., Woody Harrelson and Winona Ryder to fill out the drug-addled and rotoscoped paranoid world of Phillip K. Dick's A Scanner Darkly from 2006.
All this plus we discuss the origin of Husker Du (and Husker Don'ts), Sean's favorite brand of hot dogs, we meet a new Swedish friend, we check in with our friends who are melting in the Pacific Northwest, updates on "the Flintstone House", Dune delays, gay British bikers and so much more.
LISTEN NOW:
MP3 Direct Donloyd
Also, if you like the show, please take a minute and subscribe and/or comment on us on iTunes, Stitcher, Blubrry or Podfeed.net. Check us out on Facebook and Twitter! We'd love to see some of your love on Patreon - it's super easy and fun to sign up for the extra bonus content. We'll explode with piping hot cheese filling with your love and support.
Labels: A Scanner Darkly Goke Body Snatcher from Hell Hajime Satô Hawk Jones Keanu Reeves Philip K Dick Richard Linklater Robert Downey Jr. Winona Ryder Woody Harrelson