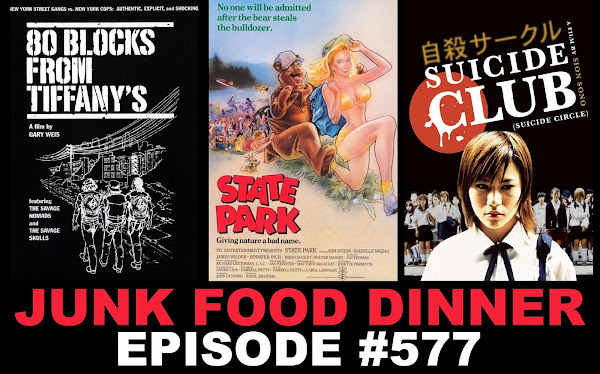 This week on JFD, we once again turn our movie picks to those insatiable maniacs, our Dom DeLuise Patreon donors and end up with three very different movies!
Up first, a small documentary film crew conduct interviews with two local street gangs, The Savage Skulls and The Savage Nomads in the Bronx, NY in 1979 in 80 Blocks from Tiffany's.
Next, a trio of young girls travel to a local park for some fun but end up getting involved with some heavy metal dudes and two brothers who own the park and are trying to prevent it from being taken over by greedy corporate business men in 1988's Canadian sex comedy State Park (AKA Heavy Metal Summer).
And finally, a Japanese detective is investigating a string of mass suicides among young people. The detective feels there may be a cult that is influencing these suicides abut why? All will be revealed (or will it?) in 2001's Suicide Club.
All this plus Parker's War Hammer game gets serious, Sean's old timey movie rundown, the death of The Biz, Jackass Forever and so much more.
LISTEN NOW:
MP3 Direct Donloyd
Also, if you like the show, please take a minute and subscribe and/or comment on us on iTunes, Stitcher, Blubrry or Podfeed.net. Check us out on Facebook and Twitter! We'd love to see some of your love on Patreon - it's super easy and fun to sign up for the extra bonus content. We'll explode with blood with your love and support.
Labels: 80 Blocks from Tiffany's Heavy Metal Summer State Park Suicide Club