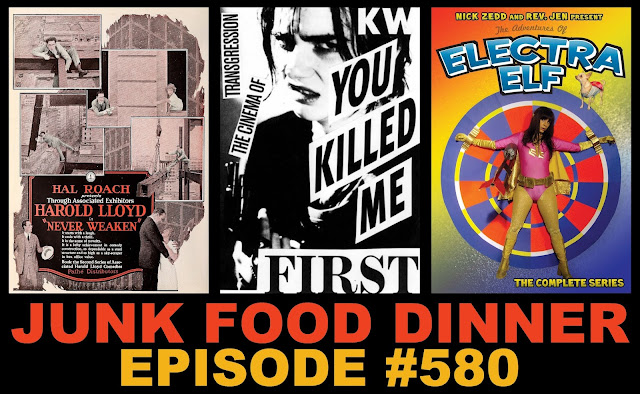 Let's face it, Junkies, it's hot as hell out there. So, let's get comfortable and slip into some breathable shorts! That's right, it's Short Films Week!
Up first, silent film legend Harold Lloyd finds love and danger around his office and a nearby construction site in the 100-year-old short film Never Weaken from 1921.
Next, New York City underground filmmaker Richard Kern gives us a snapshot into the life of a teenage girl who hates her parents and sister in 1985's You Killed Me First.
And finally, another NYC underground legend, Nick Zedd, teams up with Rev. Jen to create one of The Big Apple's weirdest public access shows; The Adventures of Electra Elf, a super hero parody with low-budget gags and local artists in cheap costumes. In this episode Electra Elf must stop New York from being overrun by tourists and giant Troll dolls.

All this plus Parker's Suicide Squad review, Kevin's adventures with Aussie bikers, big news about Ghoul Summer attire, a plea to vote for Schlocktober themes, the death of movie theaters, GWAR chat and so much more.

Also, if you like the show, please take a minute and subscribe and/or comment on us on iTunes, Stitcher, Blubrry or Podfeed.net. Check us out on Facebook and Twitter! We'd love to see some of your love on Patreon - it's super easy and fun to sign up for the extra bonus content. We'll dangle from buildings for your love and support.