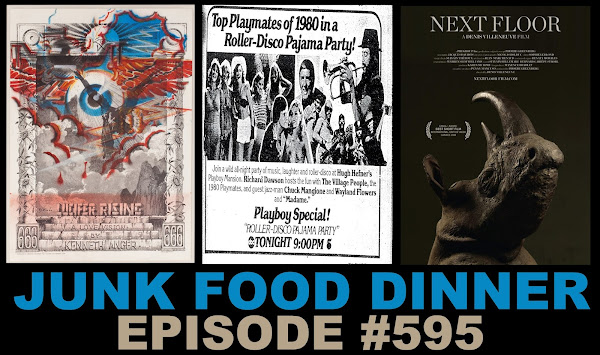 Hope everyone's having a wonderful Thanksgiving weekend, Junkies. The boys ate too much so now they have to take off their pants and slip into so comfortable shorts. Short films, that is!
Up first, legendary underground short filmmaker Kenneth Anger brings us his occult, psychedelic opus Lucifer Rising from 1972/1980. Featuring music by infamous Manson Family murderer Bobby Beausoleil and starring Marianne Faithfull, Chris Jagger and Jimmy Page this Satanic-themed trip has become quite notorious for its visual style and troubled history.
Then, in 1979 ABC aired an hour long prime-time special entitled Playboy's Roller Disco & Pajama Party. Hosted by Family Feud's Richard Dawson, the special featured live performances by The Chuck Mangione Quartet and The Village People as well as cameos by Jim Brown, James Caan, Ruth Buzzi and of course, a whole lot of Playboy Playmates.
Finally, we take a look at a 2008 short film by filmmaker Denis Villeneuve (Dune, Blade Runner 2049) about a group of rich people eating a ridiculous meal and falling through several floors of a high rise building in Next Floor.
All this plus Thanksgiving meal ideas, Sean's financial issues, Goof Lumps, new footage of The Stuff found, multiple cuts of Phantom of the Mall, the guy from American Werewolf sings "Makin' It" and so much more.
LISTEN NOW:
MP3 Direct Donloyd
Also, if you like the show, please take a minute and subscribe and/or comment on us on iTunes, Stitcher, Blubrry or Podfeed.net. Check us out on Facebook and Twitter! We'd love to see some of your love on Patreon - it's super easy and fun to sign up for the extra bonus content. We'll roller disco our way to the top with your love and support.
Labels: Bobby Beausoleil Denis Villeneuve Kenneth Anger Lucifer Rising Next Floor Playboy's Roller Disco & Pajama Party Richard Dawson short films