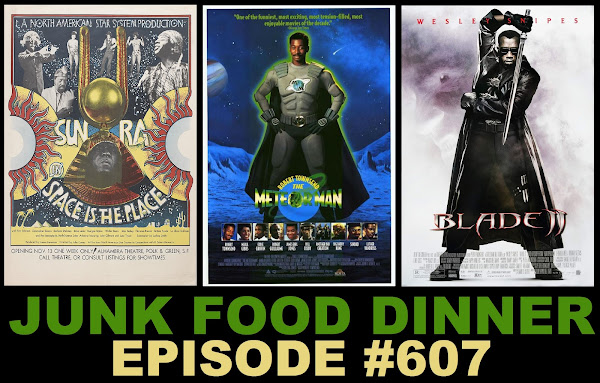 It's the final week of Black Sci-Fi-ebruary and we're going out with freaky jazz music, super powers from outer space and various forms of vampires.
Up first, experimental jazz musician Sun Ra shares his vision for black people to travel the cosmos with the aid of music in the psychedelic Space is the Place from 1974.
Then, Robert Townsend leads an all-star cast in a comic book fantasy about a teacher who gets hit with a meteor and gains super powers resulting in him becoming a reluctant super hero and cleaning up the streets of D.C. in Meteor Man from 1993.
And finally, Guillermo del Toro directs Wesley Snipes in Blade 2 from 2002, the sequel to the successful adaptation of a Marvel Comics story about a vampire hunter and his quest to protect ya necks.
All this plus 90's nostalgia, Jackassery, Kathleen Turner Overdrive, movies with the F-word in the title, sad nerd news, Black Samurai news, a hot week for blu-rays, an Olmec Toys discovery and so much more.
LISTEN NOW:
MP3 Direct Donloyd
Also, if you like the show, please take a minute and subscribe and/or comment on us on iTunes, Stitcher, Blubrry or Podfeed.net. Check us out on Facebook and Twitter! We'd love to see some of your love on Patreon - it's super easy and fun to sign up for the extra bonus content. We'll take this neighborhood back from The Golden Lords with your love and support.
Labels: Black Sci-Fi Ebruary Blade 2 Cypress Hill Eddie Griffin Guillermo del Toro James Earl Jones Meteor Man Naughty By Nature Robert Townsend Space is the Place Sun Ra Wesley Snipes