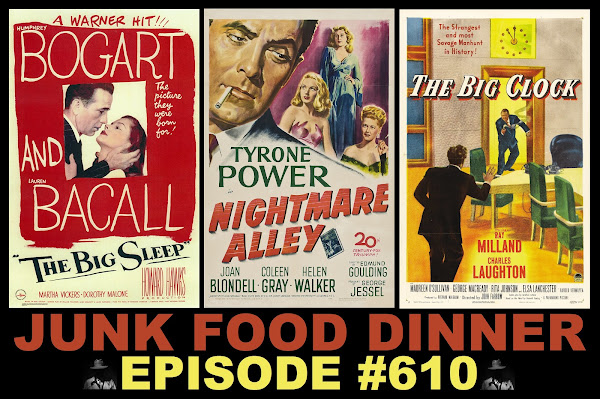 Grab a bottle of hooch, a pack of smokes, your finest suit and a gun because it's NOIRch, a special week in March where we look at three classic film noirs from the 1940's.
Up first Humphrey Bogart is a private dick investigating blackmail, double crossing and murder among a wealthy family in The Big Sleep from 1946.
Then, Tyrone Power is a carnival performer who dupes patrons into believing he has psychic powers. But when he gets greedy and tries to con a wealthy family out of their money, he quickly gets in over his head in Nightmare Alley from 1947.
And finally Ray Milland works for a popular crime magazine, but when a young woman is murdered, his boss (Charles Laughton) assigns him to find the guy she was last with in The Big Clock from 1948.
All this plus Parker's harrowing knee surgery, Kevin's 40th birthday, Hurt-ful and sad Nerd News, Jason fan films, AMC mines for gold and much more!
LISTEN NOW:
MP3 Direct Donloyd
Also, if you like the show, please take a minute and subscribe and/or comment on us on iTunes, Stitcher, Blubrry or Podfeed.net. Check us out on Facebook and Twitter! We'd love to see some of your love on Patreon - it's super easy and fun to sign up for the extra bonus content. We'll find a classy dame and settle down with your love and support.
Labels: Charles Laughton humphrey bogart Lauren Bacall Nightmare Alley Ray Milland The Big Clock The Big Sleep Tyrone Power