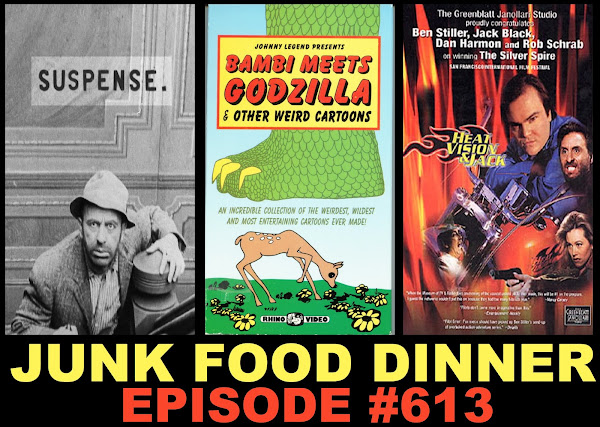 Spring has sprung, Junkies and what better way to celebrate the warmer weather than by slipping into some comfortable shorts! That's right, it's short films week once again here on JFD.
Up first, we're going old school. REALLY old school. As we take a look at one of the many short films by pioneering female filmmaker Lois Weber, Suspense from 1913. Written, directed and starring Weber, the groundbreaking short tells the tale of a home invasion and a husbands frantic race to save his wife.
Next, we get an animation two-fer as we look at the brief but memorable Bambi Meets Godzilla from 1969 as well as another cult cartoon short from the same era Thank You, Mask Man based on a comedy routine from Lenny Bruce.
And finally, we examine the pilot for TV show called Heat Vision & Jack, directed by Ben Stiller and starring Jack Black as a former astronaut who became super smart by flying to close to the sun. Also, his best friend (played by Owen Wilson) has been turned into a motorcycle. Together they have to outrun government agents and possibly aliens who are out to get them.
All this plus Parker's adventures in legitimate theatre, Tom's Aussie recommendations, Hatless Jackson's Tuscon tips, roasting dead kung fu legends, questionable Gaspar Noe release dates and much more!
LISTEN NOW:
MP3 Direct Donloyd
Also, if you like the show, please take a minute and subscribe and/or comment on us on iTunes, Stitcher, Blubrry or Podfeed.net. Check us out on Facebook and Twitter! We'd love to see some of your love on Patreon - it's super easy and fun to sign up for the extra bonus content. We'll avoid vagrants, giant lizards and men in black with your love and support.
Labels: Bambi Meets Godzilla Ben Stiller Heat Vision and Jack Jack Black Lenny Bruce Lois Weber short films Suspense Thank You Mask Man