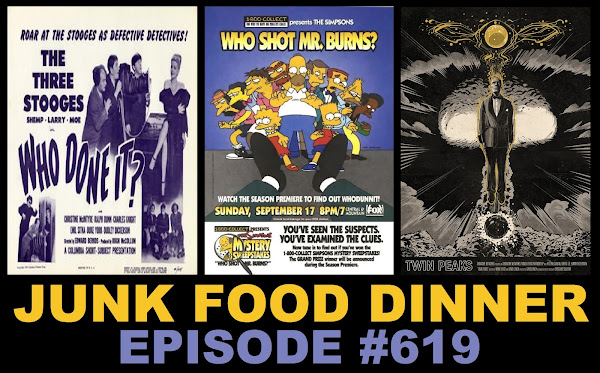 May-stery, our month-long tribute to mysteries, rolls right along as we make a stop in Shortsville for a trio of mysterious short films and/or TV episodes.
Up first, Larry, Moe and Shemp are private detectives hired by a millionaire to protect him and his fortune from a gang of thieves, only to have slapstick hijinks ensue in The Three Stooges - Who Done It? from 1949.
Then, at the height of its popularity, The Simpsons aired a two-part mystery asking the question "Who shot Mr. Burns?". The mystery lasted a whole summer and involved a contest, 1-800-COLLECT and lots of disappointed fans. We revisit the hype as we examine The Simpsons - Who Shot Mr. Burns? from 1995.
And finally, David Lynch brings his unique brand of surrealism to TV in the 2017 reboot of Twin Peaks. While the entire series could be described as trippy, it was episode 8 that stood out as a real mindfucker. We take it all in and try to make sense of it.
All this plus Kevin's Disney ban, Sean's celebrity encounter, Kevin's trip to Kentucky, Kids in the Hall peens on screen, The Fallen One calls in, Fangoria Chainsaw Award updates, Black Mirror News, hot new blu-rays and so much more.
LISTEN NOW:
MP3 Direct Donloyd
Also, if you like the show, please take a minute and subscribe and/or comment on us on iTunes, Stitcher, Blubrry or Podfeed.net. Check us out on Facebook and Twitter! We'd love to see some of your love on Patreon - it's super easy and fun to sign up for the extra bonus content. We'll solve this damn mystery with your love and support.
Labels: May-stery short films The Return The Simpsons Three Stooges Twin Peaks Who Done It? Who Shot Mr. Burns?