JFD631: The Ghoul, Night of the Ghouls, Ghoulies 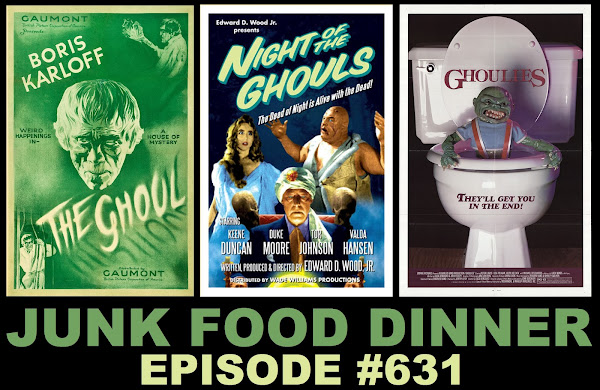 This week, it's Ghoul Summer... well, kind of... if you're here for the rape, nipple torture, war crimes and vomit-play, well, first maybe take a good look in the mirror and ask yourself "Why am I like this?", but also you'll probably be slightly disappointed this year as we're taking Ghoul Summer quite literally and doing movies about actual ghouls!
Up first, Boris Karloff plays an Egyptologist on his death bed, but he possesses a sacred Egyptian artifact that may hold the key to immortality. However, he does eventually die and when he does, many people are interested in getting their hands of his artifacts. But Boris was right all along and returns from the grave as an undead fiend to exact his revenge in The Ghoul from 1933.
Next, Ed Wood assembles his usual gang of weirdos for another low-budget, but enjoyable horror romp in Night of the Ghouls from 1959.
And finally, a man and his girlfriend move into his childhood home, not knowing it was formerly a house of Satanic worship. When the man decides to dabble in the dark arts himself, he summons some terrifying little creatures in the Empire Pictures classic Ghoulies from 1985.
All this plus Kevin supports local filmmakers, Parker takes in some fine art, a double dose of sad nerd news, beach-themed blu-rays and so much more.
LISTEN NOW:
MP3 Direct Donloyd
Also, if you like the show, please take a minute and subscribe and/or comment on us on iTunes, Stitcher, Blubrry or Podfeed.net. Check us out on Facebook and Twitter! We'd love to see some of your love on Patreon - it's super easy and fun to sign up for the extra bonus content. We'll weasel out of another Ghoul Summer with your love and support.
Labels: Boris Karloff Charles Band ed wood Ghoul Summer Ghoulies Night of the Ghouls The Ghoul