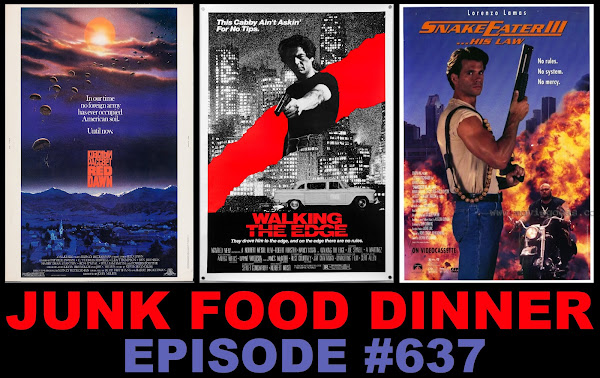 We say goodbye to Bicep-tember with three action-packed flicks picked by our fabulous (and probably very strong) Patreon donors.
Up first, Patrick Swayze leads a group of reluctant teen soldiers (including Charlie Sheen, C. Thomas Howell, Lea Thompson and Jennifer Grey) against an invasion of Communists on American soil in Red Dawn from 1984.
Next, Robert Forster plays a down-on-his-luck cab driver and former baseball player who gets mixed up in a revenge plot by Nancy Kwan who is out to avenge the death of her husband and son by a gang of sleazy criminals in Walking the Edge from 1985.
Finally, we jump right into the third installment of Lorenzo Lamas' thrill-ogy of flicks about a former military expert for hire in Snake Eater III: His Law from 1992.
All this plus Parker's Clerks 3 assessment, Kevin Smith's wardrobe choices, Dana Carvey chat, Toxic cookies, Ween chat, Matthew Sweetman calls in, we go hard for Godard, hot new blu-rays and so much more.
LISTEN NOW:
MP3 Direct Donloyd
Also, if you like the show, please take a minute and subscribe and/or comment on us on iTunes, Stitcher, Blubrry or Podfeed.net. Check us out on Facebook and Twitter! We'd love to see some of your love on Patreon - it's super easy and fun to sign up for the extra bonus content. We'll avenge our child's death with your love and support.
Labels: Charlie Sheen Lorenzo Lamas Nancy Kwan Patrick Swayze Red Dawn Robert Forster Snake Eater III: His Law Walking the Edge