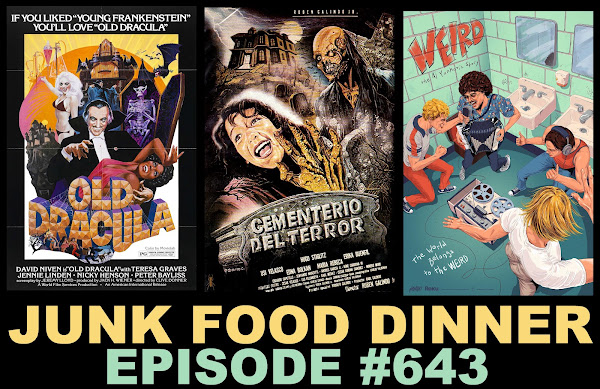 This week on Junk Food Dinner, while Sean is out exploring Japan, we go back to the original JFD recipe and conjure up the ghost of original JFD host Mr. Mark Freado Jr. to explore three very different flicks.
Up first, Count Dracula has opened his castle up to tourist in an attempt to find a rare blood type to bring his long dormant wife back to life. When he finds the blood type among a group from Playboy Magazine, he is able to bring her back, only this time she's black! Hijinks ensue in 1974's Old Dracula (AKA Vampira).
Then, we sample an 80's horror flick from Mexico (but filmed in Texas) about a group of college kids who accidentally raise the dead only to be picked off one by one and also put a young group of trick 'r treaters in danger in Cemetery of Terror from 1985.
And finally, we get the not-so-true story of the rise of America's foremost parody song writer in Weird: The Al Yankovic Story from 2022.
All this plus we catch up with what Mark has been up to since we last talked, Godzilla Day, we pay respect to Banana Man, hot new blu-rays and so much more.
LISTEN NOW:
MP3 Direct Donloyd
Also, if you like the show, please take a minute and subscribe and/or comment on us on iTunes, Stitcher, Blubrry or Podfeed.net. Check us out on Facebook and Twitter! We'd love to see some of your love on Patreon - it's super easy and fun to sign up for the extra bonus content. We'll change the lyrics to popular songs with your love and support.
Labels: Cemetery of Terror David Niven mark freado Old Dracula (aka Vampira) Weird Al Weird: The Al Yankovic Story