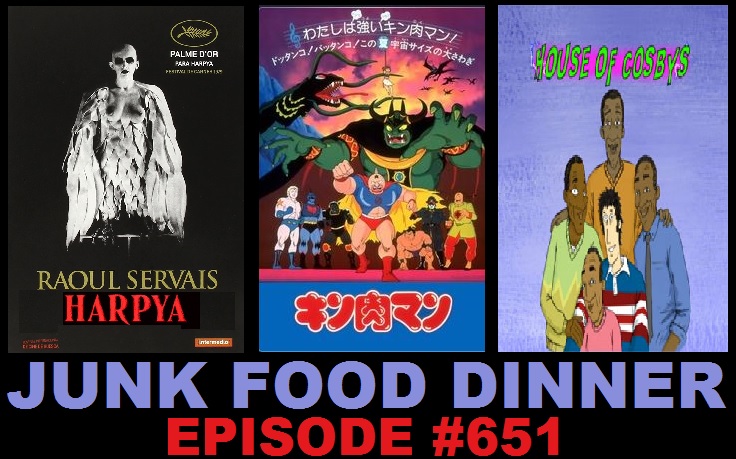 This week: the standard JFD lineup is augmented by none other than world-famous anime advocate Jason "The Friz-man" Frisbie (of Pool Party Radio!) to review a trio of bizarre short subjects!!

Up first! We're surprised to find out that Belgium had an animated film scene when Kevin picks Harpya, from 1979. It features pioneering live-action/animation hybrid techniques, mythical creatures, and loud squeeking noises.

Next up! We head on over to Japan with a meat-obssessed outerspace Japanese wrestler dude in Kinnikuman: Stolen Championship Belt, (from 1984). Featuring a fake-ass Terry Funk!

Finally! Of course, it's 2005's House of Cosbys, because Parker picked it.

Also, if you like the show, please take a minute and subscribe and/or comment on us on iTunes, Stitcher, Blubrry or Podfeed.net. Check us out on Facebook and Twitter! We'd love to see some of your love on Patreon - it's super easy and fun to sign up for the extra bonus content. We'll battle Octopus Dragon III on Planet Metro for your love and support. With picks like these, you GOTTA #DonloydNow and listen in!
Labels: animation Anime Belgium Harpya House of Cosbys Justin Roiland Kinnikuman Kinnikuman: Stolen Championship Belt Raoul Servais short films