Last week, I decided I'd be watching the "Saw" movies. All of them. Quickly. Here are my thoughts on the first two movies. What follows is my detailed journey into "Saw III" and "Saw IV."

"Saw III" (2006)
Everyone (read: Mark) told me going in that parts 1 and 3 of "Saw" were the good ones. After enduring "Saw II," I was really, really hoping Mark was right so that I could get at least one more high point in my "Saw" journey. Well, give it up for Mark, he got it right about the third flick. While I probably couldn't recommend this third installment as a good movie, I can fully recommend it as a good Saw movie. 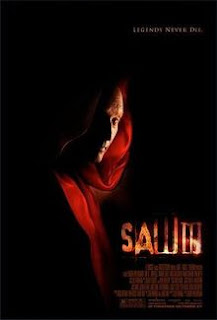 We're back to this city where run down warehouses and living quarters are all one muted color and lighbulbs aren't designed to go over 20 watts of power. Why is everything so grim and bleak looking in these movies? Even the houses of doctors look like they're made out of diseased, old Buicks and rusty cockroaches.

Apparently having brain cancer can effect murderous engineers the same way it does normal people, as our hero Jigsaw is now bed-ridden and dependent on Shawnee Smith, which actually sounds kind of enjoyable, now that I think about it. Anyway, the murderous duo kidnap a brain surgeon and try to convince her to save Jigsaw or face a gruesome death via a rusty metallic trap, which seems to be Jigsaw's only means of communication. I have a feeling that when he orders pizzas, he decides on how much to tip by whether or not the delivery guy can escape from a bear trap helmet.

Wait a minute. Why didn't Jigsaw get that first doctor ("Hot Shot" Cary Elwes) from the first movie to cure his cancer?

Anyway, while that's all happening, we have a dude with no charisma stuck in a warehouse who gets to decide whether or not to save people stuck in various awesome traps. I guess after the bore-fest that was the previous film's "traps," the filmmakers decided to kick it up a notch with a trap that drowns you in the liquified carcasses of rotting pigs. If ever there was an appropriate use of Ernest P. Worrell's "Ewww" face, this would be it. And if you were to add a hundred tons or so of cow feces to the liquid pig mixture, you'd have a pretty good idea of how California's central valley smells around noon in the summer. 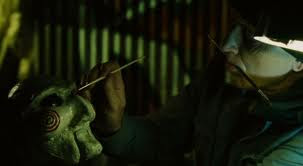 Oh, spoiler alert by the way. Though, if you're reading this much of my "Saw" review (read: rant), I'm gonna go ahead and assume you've seen these movies and are a big fan of the series, as I doubt anyone in 2011 needs to read a reiew of "Saw III" to decide wether or not to rent it.

So, in what reads like the logical conclusion of a trilogy, Amanda fails her test to become the heir to Jigsaw's throne (which is probably rusty and metallic), and Jigsaw gets murdered by that husband dude (which is cool with Jigsaw, he was totally counting on that). Like I said, this seems like a pretty good place to call it a day for the "Saw" series, not just because they're inevitably going to get dumber and dumber, but because this would be a good ending. Jigsaw dies, his incompetent (yet sexy) apprentice doesn't get to carry on his legacy, and we're still left feeling an uneasy dread because it's revealed that the doctor's daughter will apparently starve to death in a room that only Jigsaw knew the location of. A traditional way to end a story.

But that won't happen because there's still money to be made and (if I know anything about horror) Jigsaw's gonna have to spend time in New York City or on a spaceship or in "the real world" before it's all over.

"Saw IV" (2007)
Despite the fact that I just watched this one a few days ago, it took me a full ten minutes before I could remember the plot. I'm using the word "plot" very liberally here. Things are probably gonna get pretty hazy here and I may start confusing elements of the next few movies. I actually wish that Jigsaw would spend time in Manhattan or outer space, so as to give me some kind of map marker as I try to navigate through these insanely similar movies. 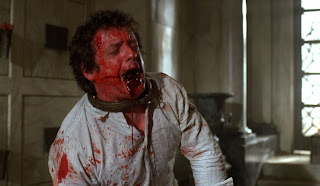 One of the background cops from a couple previous flicks is now thrust into the starring role because everyone else is dead. I'm also using the word "starring" very liberally, by the way. This cop is sent out to help people in boring traps while searching for a bearded Donnie Wahlberg (who is apparently alive, despite being left for dead in "Saw II"). We're also introduced to Strahm and Hoffman (more cops) who are seemingly played by the same actor. These guys look identical and I keep confusing them and it's pretty annoying. Another annoying thing about this film (and the series) is all the goddamn cops. Police officer is apparently the only goddamn career choice in this city. Which, I guess is probably a good gig up until you get murdered by a Jigsaw trap, which basically means you're fired.

I guess I don't really remember much about this mediocre installment. They killed off the two most interesting characters in the last flick and now we're basically left with the floaters, most of whom get shot in the climax. Yep, that's Jigsaw's master plan: hoping everyone will accidentally shoot each other. Oh, we're also introduced to Jigsaw's wife, who contributes absolutely nothing to the story and is not interesting at all. I think it's revealed that before becoming a weirdo murderer, Jigsaw was a real estate agent or something, which solved the mystery of how he always manages to have these very conveniently abandoned warehouses and factories, though I guess they could have just set the film in Detroit to explain that one. 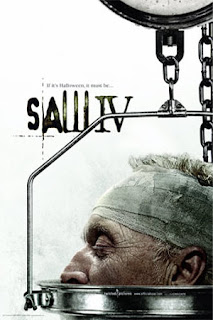 Don't get me wrong. Despite the fact that it leads to the movies having no interesting focal character, it's an interesting, bold choice to have a horror franchise where your villain is dead. Truly dead, I mean. He's not undead or ghostly dead or anything like that. Dude is totally dead (except for his voice, which somehow lives on through the tricycle puppet for the rest of the series). Jigsaw is dead and is replaced by Hoffman. What would have happened if they decided to replace the killer from "Friday the 13th" with someone else in the sequels? How would fans react? Oh, wait. That happened. A couple times, actually. I dunno where I'm going with that other than to say again that a "Saw" without Jigsaw is pretty dumb. Couldn't his cancer have just gone away like Breaking Bad's? And while I'm on the subject, I think Saul Goodman should be in the "Saw" movies.