Parker vs. Saw: The Final Chapter

I've finally decided to finish my reviews of the "Saw" movies. If you'll remember from Parts one and two, I had never really seen the "Saw" movies, and seeing as to how they're dead now, I figured it was a perfect time to watch them all and I did so in three days. Sorry this final set of reviews is coming so late but I've been hunkered down in my fallout shelter. And, no, I don't mean that I'm afraid of Japan's nuclear smog attacking my home in California, I mean that I've been playing through "Fallout: New Vegas" again.

"Saw V" (2008)
Up until now, there's been plenty to criticize the Saw franchise about: Reusing the same plot, silly acting, melodramatic meloncholy. But until this fifth entry, the franchise has never been boring. And guess what! We'll be making up for lost time. I don't remember much of the plot in this one, but that's not because I'm writing this like a month after watching the movie, I couldn't remember much about the film while watching it.

What I do recall is that Julie Benz (of "Dexter," "Buffy" and "Angel") has a really bad wig. Oh, and she's also stuck in a big Jigsaw trap/warehouse with a bunch of annoying assholes. Why Julie Benz decided to be in this movie in her downtime from being on the best television show on ... um, television, I have no idea. That's like if your little brother's shitty punk band, The Anarchy Skullz, somehow got Milo from the Descendents to sing for them.

Julie's scenes wherein she has to pass a bunch of Jigsaw's tests to survive are pretty weak, seeing as to how it's fairly obvious that you're not gonna kill the most famous person in the movie. They got us in the first film when Danny Glover got offed, but we're in safe sequel territory here. On the bright side, one of her "friends" does get an arm torn in half (longways!) and that's the obvious high point of the movie. Dude's arm looks like that taxi driver's from "Total Recall." 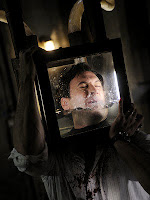 Aside from that, we get a bunch of dumb scenes with the new Jigsaw, Hoffman, doing really boring things. I bet at this point, the filmmakers were kicking themselves over that whole "giving Tobin Bell cancer" thing, on account of him being the best part of the franchise.

Anyway, Hoffman kills that cop that looks just like him. The end.

"Saw VI" (2009)
(I'm 99% sure) this is the first movie in the franchise to feature a shot of the sky. While this may not seem like a big deal, not seeing any trace of sky in the previous films gave them all an intense feeling of isolation and a clausterphobic atmosphere. The admittance that there is, in fact, a sky, in this film makes you realize "Oh, yeah. This town's probably more than just a collection of rusty warehouses. There's a whole world out there!" It's kind of like the ending of "The Truman Show."

In a desperate ret-conning attempt to tie into the day's headlines, Jigsaw is turning his traps on the fat cats in the health insurance business that wouldn't pay for him to have brain tumor surgery.

This is kind of a ballsy thing to do. It's also completely retarded and an admission from the studio that they're creatively tapped out on Saw. I imagine a bunch of movie executives looking around the room with 5 o'clock shadows and bloodshot eyes until one of them accidentally trips on a DVD copy of Michael Moore's "Sicko" and finds the muse.

Looking back, who would wanna see Jason using his diplomatic prowess to remove Noriega from power in Panama in the '80s? And how, exactly, would Chucky react to the Whitewater scandal of the '90s? And I'm sure Victor Crowley of "Hatchet" thought that George Bush didn't care about hideous Cajun ghosts in the days after Hurricane Katrina. 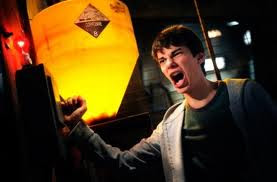 This would, actually, be pretty cool if the director realized it was a batshit insane idea. Doing this with a tongue-in-cheek campy feel would be fun and a much needed shot in the arm for the series (pun very much intended). But, there has never once been a glimmer of fun, camp or self-awareness in these films. Unlike Freddy, Jason and pretty much everyone else, "Saw" decided to stay the course and never follow the double shot of its declining quality with the chaser of humor.

"Saw" getting political no doubt lead to its ultimate demise. This movie is the least successful of the series and the most laughably rediculous. I'm surprised that it wasn't revealed in a flashback at the end that Hoffman's new Jigsaw apprentice is Barack Obama, who would then give us all a lecture about how we need health care reform.

"Saw 3D" (2010)
The final entry in the saga, mercifully, and one of my favorites. This movie seems the least like a Saw movie of the series. The film opens with a trap in the middle of a mall or a park or something, for everyone to see. In the last flick, we got a shot of a gray, dreary sky through a window, but here we have a full-on exterior shot with a big blue sky and a bunch of extras and color and all the things we've never seen from "Saw."

We also have some dude going from talk show to talk show telling the story of how he survived a Jigsaw trap. This dude hasn't been in any of the previous "Saw" flicks, so it's pretty obvious that he's lying. Then it's revealed that he's lying. But, we've never seen sets like "tv studio" in a "Saw" movie, so even that seems really fresh. At the tv studio, we're introduced to this imposter author's publicist, his girlfriend and a friend. So, later, when Jigsaw inevitably puts them all in traps, it's hecka refreshing to have been introduced to these characters beforehand. Rather than some new person just showing up in a trap, with a Jigsaw note to tell us why and who they are, we get to figure it out for ourselves. "Oh, these people are connected to the story. I remember them from an earlier scene," I thought while watching. This seems totally unremarkable for the cinematic art form in general, but it kinda revolutionizes the "Saw" franchise.

In other news, we're introduced to the last living police officer in all of town as he tries to put an end to Hoffman's Jigsawing ways. And Hoffman spends all his time trying to kill the original Jigsaw's wife. Did I mention that she showed up? She showed up. It was back in part four or something. But it's okay that I didn't mention that because she hasn't fucking done a single goddamn thing in three fucking movies.

Aside from a badass trap wherein Linkin Park and all his friends get killed by a car, the traps in this flick are pretty lazy and dumb.

Anyway, (spoiler alert) it turns out that Dr. Gordon (Cary Elwes) from the original movie is totally alive. Not only that, but he's been running the Jigsaw game behind Hoffman's back this whole time! I'll be honest, I didn't see this coming. I didn't see it coming because the Dr. Gordon died in the first one and then (I'm pretty sure) we see his dead, rotted body in one of the sequels. Nevermind that, though. He's back!

Saw 7 leaves us with a pretty smooth ass ending where Cary Elwes locks Hoffman up in the room from the original flick. I'm a little bummed this is the last one. We've finally been purged of the soul-sucking boring "lead man" in Hoffman and he's replaced by a somewhat capable actor to take over as Jigsaw (Elwes), who also happens to be an interesting character. This seems like a really interesting place to continue the story, but I guess I'd rather be left wanting a little more good from "Saw" than getting the inevitable crappy sequel.