Parker vs. Wishmaster 3:
Beyond the Gates of Hell 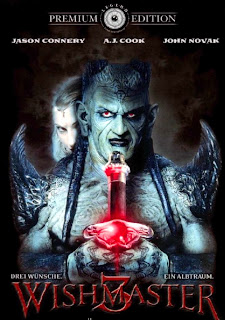 A long time ago, I reviewed Wishmaster and Wishmaster 2 with the intent to do the whole series (the way I did with Saw an even longer time ago). But I forgot all about it. Or maybe I was just too bummed out to watch the final two Wishmaster films because Andrew Divoff (The Djinn) left the franchise to be a Russian on Lost for a couple episodes. He probably did other stuff in life, too, I guess. And I felt that a Wishmaster divided itself would not be able to stand! Five minutes into this third instalment, my fears were confirmed.

We begin with a blonde woman having nightmares stemming from her survivor's guilt about her family dying in a horrific accident that she lived through. This is so similar to the first WM movie that it's exactly like the first WM movie. Would you be willing to bet that like WM1's protagonist, this girl gets over her guilt to save the day? We also learn that her name is Diana and she has a boyfriend that she may or may not like. In fact, during an early scene, she finds her boyfriend talking to a girl who tells Diana that her boyfriend is going to cheat on her. I assumed this was a subtle way to foreshadow the fact that the boyfriend would cheat on Diana later in the movie, but I was totally wrong. They're instead foreshadowing the fact that this girl is (mostly) slutty and will be (mostly) naked later because she (totally) comes on to the Djinn.

Diana, a student of some sort, is toying around with ancient artifacts (i.e. spare puzzle boxes from Hellraiser 6) and finds the Djinn's prison, a small ruby. There were no puzzle boxes in the previous films, so is this a different genie locked in a similar stone? Or the same genie (played by a new guy), but somehow he got locked in a Lament Configuration sometime between WM2 and WM3? And was that the same leprechaun in all the Leprechaun movies? Friday the 13th 5 really fucked with my head at a young age and now I distrust the identities of all slashers.

Anyway, so Diana discovers the stone and then peaces out on her teacher (cuz he totally tried to hit on her and then gets rejected HARD). Then the Djinn just shows up. He walks out of the bathroom or something and he's just in frame somehow. This is a total bummer and cop out because parts 1 and 2 set the rule that when the Djinn is summoned, he starts out as a weird fetus and needs to get stronger through wishes. I guess they nixed that part of the mythology because money, time and talent weren't part of this director's toolbox. This director, by the way, is only notable for directing WM3, WM4 and a Dexter iPhone app* 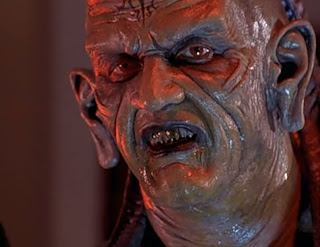 So, the Djinn shows up and we can tell that no one even cared about writing this movie because the professor sees him and goes "Jesus" and the Djinn says "Not even close" and it's like the entire Hellraiser series just passed before your eyes. The Djinn blackmails the teacher into helping him by reminding him of the fact that he's a rapist. He does this by faking an orgasm. It's pretty fucking nonsensical. The Djinn also offers him a wish cuz they're solid bros now apparently. The professor wishes for a hot chick. No! Two hot chicks, he says, catching himself before making the silly mistake of only wishing for one measly hot chick. So, two hot naked chicks show up and start making out with the dude while this hulking demon monster watches and gets visibly aroused. The Djinn is moaning, licking his lips and at one point even cups his hands in the air like he's playing a pair of air titties.

Then the naked ladies eat the teacher. There's no clever wordplay involved, no saucy pun, no Twilight Zone-esque twist. The guy wished for chicks and he got them. But they killed him. And so the deaths go in this flimsy excuse for a movie. No more cute wish-tricks that we've been accustomed to. The next kill scene involves a secretary (or someone) wishing for "a mountain of flames" to destroy her paperwork so she can go home. I've never seen a "mountain of flames," so I got a little excited. But, then the Djinn just sets her on fire. Well, not her, but a stuntman in a similar cardigan. Not one piece of paper is engulfed. The Djinn didn't even really fulfil the main part of the wish! There's also a death scene where The Djinn is holding a dude by his throat, asking him to make a wish and the dude's all "Blow me, bro!" And the genie just blows air out of his mouth and the dude floats into some antlers on the wall, getting impaled, like he's a bag of moldy Kiefer Sutherlands. But, how cool would this movie be if the Djinn was compelled to grant his wish and reluctantly sucked that dude's dick to completion? I bet the Djinn would feel so violated. 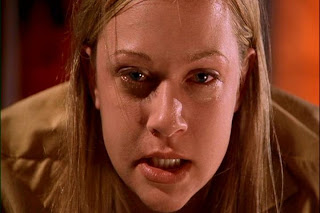 Then some other bullshit happens. Diana screams, all sweaty, into the camera for a while. And during an obligatory research scene, someone says "The myth of Madea is seriously sick and twisted," which is kind of funny and during a college kid sex scene, the guy goes "Behave!" like Austin Powers, so that brought me back to the good ol' days. There's also a completely needless scene where The Djinn (disguised as the dead professor) teaches a class about how the genies started the Trojan War.

Diana wishes to be protected by the archangel Michael (because WM2 ushered in all that weird Christian mythology and WM3 is happy to keep on keepin' on) but it's not even cool. Basically all that happens is her boyfriend gets a sword and a deeper voice. Couldn't the Djinn have come up with a way to turn this into a trick wish? He couldn't have summoned John Travolta's character from "Michael" rather than the actual Conqueror of Satan? Seems like a bad move to grant this one wish straight up. He should have pulled some cute shit.

Anyway, good triumphs over evil and the angel goes back to heaven and blah blah. This movie is terrible and it's easy to see why Andrew Divoff wanted no part of it. I should have had no parts of it, too. That being said, I'll probably watch WM4 soon because I'll fell empty if I don't finish these off.

*Or maybe it's a short film or a cartoon or a DVD special feature. I can't find much about it.